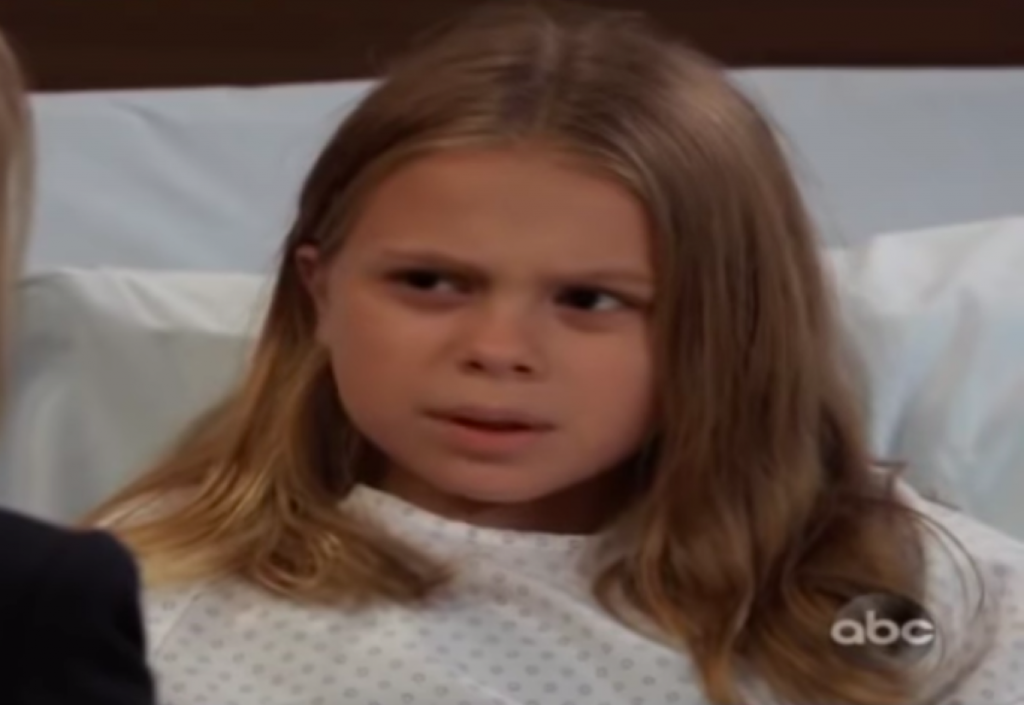 Welcome to your Tuesday, December 17th General Hospital (GH) recap! We begin our day at the Jerome Gallery where Laura Webber (Genie Francis) makes a very high bid for the Helena portrait. She bests out Valentin Cassadine (James Patrick Stuart) and right as she does, the portrait goes up in flames.

At the Port Charles pier, Charlotte and Rocco are arguing about whether she really has a secret body guard or not. To prove that she does, she jumps into the river as Lulu Falconeri (Emme Rylan) and Dustin Phillips (Mark Lawson) look on in horror.

At General Hospital (GH) , Hamilton Finn (Micheal Easton) gets an update on the gunman that Peter August (Wes Ramsey) killed. Anna Devane (Finola Hughes) says that Peter is a hero. In his hospital room, Franco Baldwin (Roger Howarth) open his eyes as his family looks on.

Peter August (Wes Ramsey) gets annoyed when his mother Anna Devane (Finola Hughes) and Hamilton Finn (Michael Easton) call him a hero. They get the news that Franco is awake and Peter breathes a big sigh of relief.

GH Spoilers – Franco Baldwin wakes up after the procedure

In his hospital room at (GH) , Franco Baldwin (Roger Howarth) begins to wake up as Elizabeth Webber (Rebecca Herbst) calls out his name. Cameron Webber (James Lipton) and Elizabeth look on as Franco remembers who he is.

Andre Maddox (Anthony Montgomery) looks on as Franco tries to remember what happened, he does not realize its not summer anymore.

Laura Webber (Genie Francis) asks Ava Jerome (Maura West) if she started the fire somehow? Ava denies she had anything to do with it as Jasper Jax (Ingo Rademacher) contemplates if she had help.

Valentin gives a cheers to Ava and that portrait is gone with all its secrets. Curtis Ashford stays behind to chat with Ava and figure out why she destroyed the portrait. Curtis finds Trina and begins to grill her about what she might know.

After arguing with Rocco about the existence of her bodyguard, Charlotte jumps into the water. Dustin Phillips (Mark Lawson) dives in after her as Lulu Spencer (Emme Rylan) calls 911. Dustin gets her out of the cold water, but she is in shock and not breathing properly.

Valentin gets a call about Charlotte and they all take off to General Hospital. Everyone is confused about why she dived into the water and Rocco brings up her “bodyguard”. Laura says that she has heard about this bodyguard as well.

General Hospital Spoilers: Can Sonny And Carly Mend Their Marriage Before It&#8217;s Too Late @celebratesoaps https://t.co/qR6icKWB4n

From the storage room, Nikolas Cassadine (Marcus Coloma) sees the portrait go up in flames and vows revenge. Suddenly Trina Robinson (Sydney Mikayla) finds him and asks him what heck he is doing? Nikolas says he is a collector as she threatens to call the police.

Jax meets with Nikolas at the pier and says hes relieved the portrait is gone.

Cameron apologizes for what happened and Franco says there is no need to do so.

Franco asks for Peter to come into the room and says he knows what hes done. He thanks him for stopping the gunman who tried to intervene.

Finn says Charlotte is okay as Laura goes in to see her granddaughter.

Franco and Elizabeth embrace on his hospital bed as they reconnect.

Lulu and Valentin scream at each other over the accident and the care of Charlotte.

At the gallery, Ava is having a drink alone when Nikolas walks in – she pulls a gun on him……flash to preview

Needless to say, General Hospital fans will have to tune in for all of the action this week on the ABC network.

The Young and the Restless Spoilers: Michael And Lauren Receive A Christmas Surprise