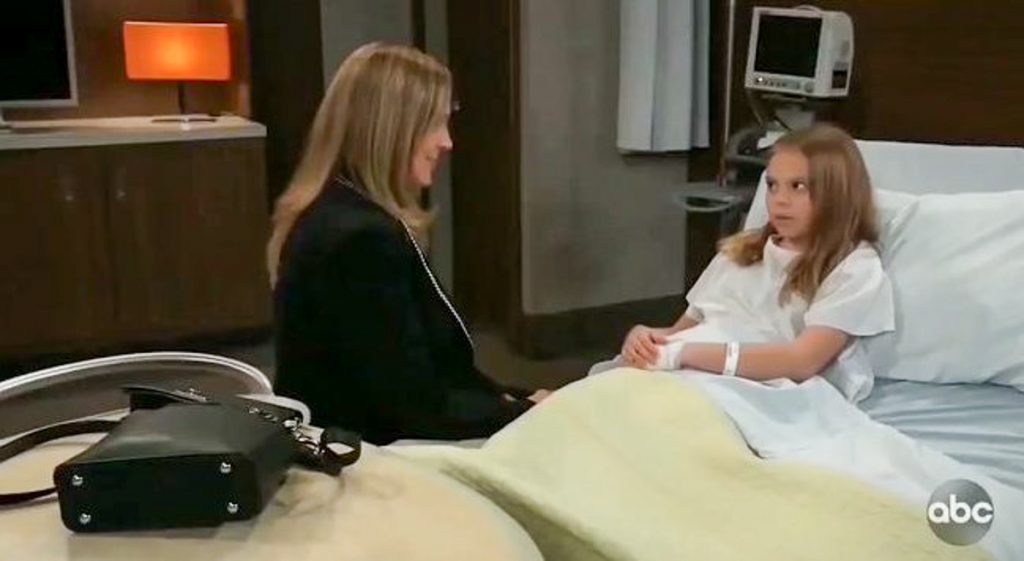 Welcome to your Thursday December 19 th General Hospital (GH) recap! We begin our day at the Corinthos mansion where Sonny Corinthos (Maurice Bernard) is getting an update on his “shipments” Jason Morgan (Steve Burton) wonders if something is bothering him and Sony asks what the heck is going on with Carly?

At General Hospital (GH) Jasper Jax (Ingo Rademacher) has brought Carly Corinthos (Laura Wright) a smoothie. He says he has a bottle of wine for her when all of it is over. On Spoon Island, Liesl Obrecht (Kathleen Gati) inquires as to how Charlotte is doing after her jump in the river. Liesl blames Lulu for the accident and Valentin Cassadine (James Patrick Stuart) says she didn’t fall in, she jumped.

At Charlie’s Pub, Lulu Falconeri (Emme Rylan) meets up with Curtis Ashford (Donnell Turner), her mom Laura Webber (Genie Francis) and Kevin Chamberlain (Jon Lindstrom). They explain that Charlotte jumped in the river to try and prove her bodyguard was real. Curtis says hes not sure why he is there and Laura says they need dirt on Valentin for a custody battle. Curtis asks about the body guard and Kevin thinks the stress of everything has caught up to Charlotte. Lulu decides to go confront Valentin and settle their dispute.

At the Jerome Gallery, Ava Jerome (Maura west) pours herself a drink and suddenly turns around with a gun, pointed right at Nikolas (Marcus Coloma). Nikolas says she does not need the gun and Ava says that for her protection she does. Ava asks him why he is there and Nikolas wonders if the codicil burned with the portrait. Nikolas explains how he survived the fall from the window and subsequent “drowning.” He says the codicil is what will give him all his money back from Valentin

At the Metro Court, Lucy Coe (Lynne Herring) is in talks to a friend about starting her company Deception again. The friend is skeptical, as Lucy grabs Sasha Gilmore (Sofia Mattsson) and presents her as the new “face“ of Deception.

At Wyndemere, Nina Reeves (Cynthia Watros) confronts her aunt Liesl about the Sasha paternity lie. Nina begs Liesl to tell her the truth, she does not want to lose another family member. Liesl explains that she knows how Valentin manipulated the DNA test of Sasha. Nina is livid and begins crying when she realizes the betrayal.

Jax explains what happened at the bidding for Helena’s portrait which shocks Carly. Carly asks Jax to turn Nikolas in to the police. Carly is angry that she has had to lie to Sonny and begins yelling at Jax as Jason comes from around the corner.

Sonny Corinthos asks Jason if he knows what’s up with his wife Carly and Jason says he has no idea. Sonny believes she is up to something and it somehow involves Jasper Jax. Jason asks if they have been fighting about something and he says they disagreed about Mike’s condition.

Laura tells Kevin that Charlotte shows a photo of Nikolas and said he is her secret bodyguard. Lulu shows up at Wyndemere and confronts Valentin about Charlotte’s problems. They agree that they despise each other. Liesl says she kept up the lie because Nina was so in love with her new child Sasha. Jason walks with Carly and asks her what the heck is going on. She says Sonny cannot now that Jax is doing something illegal or he will deport him. Lucy thanks Sasha for helping secure the Deception funding. Nikolas asks if Ava found the codicil and she says of course she does. An upset Nina ponders what to do next……..flash to preview