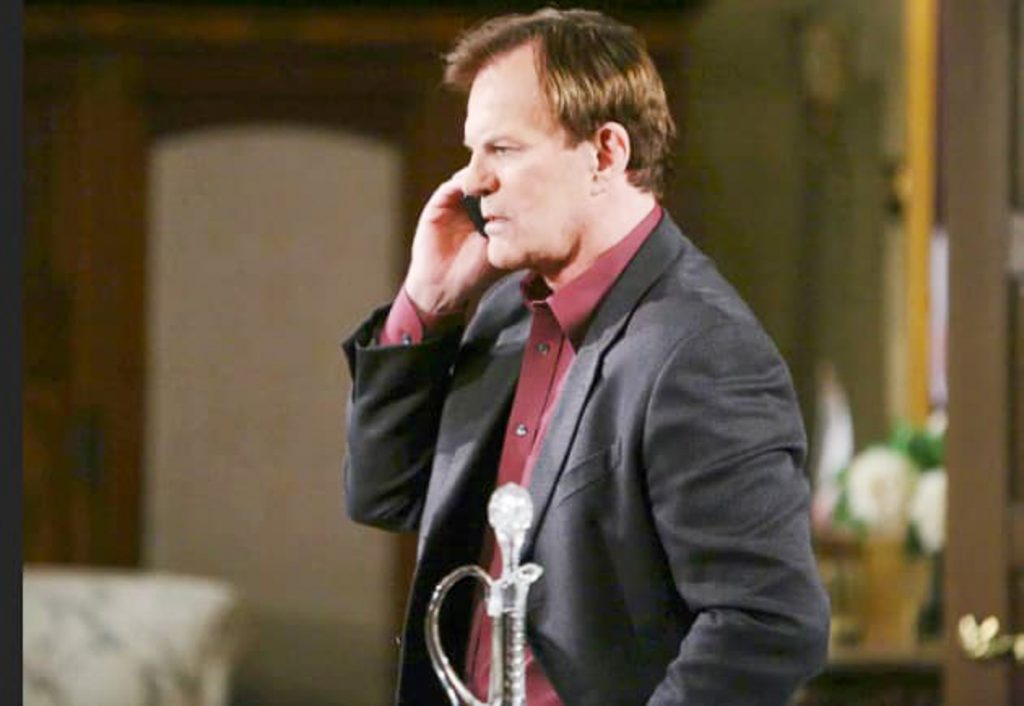 Roman Brady (Josh Taylor) realizes Kate Roberts (Lauren Koslow) is hiding someone in her room, and where he may not just barge in to find out who, Days of Our Lives viewers can expect him to have some questions for Kate! Kate is hiding someone, but Roman would not believe who it is if he were to see Kate’s guest, and even then he would be wrong if he guessed by who the guest looks like! Stefano DiMera (Stephen Nichols) looks just like Steve Johnson (Stephen Nichols) minus the patch, after all with two good eyes!

Gabi Hernandez DiMera (Camila Banus) is shocked to receive a call from Kristen DiMera (Stacy Haiduk) that might make her just a little suspicious – and it should! Kristen has to convince her that she and Lani Price (Sal Stowers) are not friends, when they’ve been buddy-buddy and are plotting to each take back what is hers – together! Kristen is still livid over what Gabi did with putting the app on her phone that could kill Julie Williams (Susan Seaforth Hayes) that she used to blackmail Lani into dumping Eli Grant (Lamon Archey) – and even though Stefan DiMera (Brandon Barash) and Kristen weren’t particularly close, he was still Stefano’s son and Gabi disrespecting him by jumping Eli’s bones starting over a year ago when Stefan was barely cold certainly doesn’t give her any brownie points in the DiMera books!

Kristen and Lani aren’t the only ones who can’t understand Eli’s having become involved with Gabi, let alone having real feelings for her – actually, it’s a simple process to attack the emotionally wounded and start something new with them – it’s called forced rebound, and it is very manipulative! Abigail DiMera (Kate Mansi) who once upon a time many moons ago was best friends with Gabi, before Gabi ruined things between them, questions Eli about his feelings for Gabi and will want him to understand that he is likely being manipulated for some reasons known only to Gabi – although Lani knows! She wanted Lani to hurt the way she hurt and pouncing on Eli with Stefan barely buried was all part of it!

Stefano will get a surprise visitor in Friday’s episode, although it is not clear whether he has gone back to the lair that he and “Hope Brady” aka Princess Gina Von Amberg (Kristian Alfonso) share or if it’s while he is still hiding out in Kate’s room at the Brady Pub! Perhaps Roman is not being as polite as we thought he would be and just busts right in like he did on his daughter Carrie Brady (Christie Clark) and Rafe Hernandez (Galen Gering) who’d spent the night with her? Probably not – but perhaps with one mystery solved either Abigail or perhaps Chad DiMera (Billy Flynn) has tracked Stefano down!