Welcome to your Monday, June 10 General Hospital recap! We begin our day at the office of Crimson, where Jasper Jax (Ingo Rademacher) runs into Bobbie Spencer (Jaclyn Zeman) who gives him a happy to see you hug.

At Charlies Pub, Nina Reeves (Michelle Stafford) is proposing to Ava Jerome (Maura West) that she be on the cover of the next issue of Crimson magazine. Nina says she will be on the cover and there will be a full interview. Ava says that she needs to be honest with her, she just wants a story about Ryan Chamberlain (Jon Lindstrom).

Also, at Charle’s Pub, Carly Corinthos (Laura Wright) meets with her brother Lucas Jones (Ryan Carnes) about the baby Wiley situation. Carly cannot believe that Shiloh Archer is the baby’s father. Carly doesn’t understand why Lucas would not turn to her and Sonny for help. Julian Jerome (William Devry) interrupts and says “because he’s his father.” 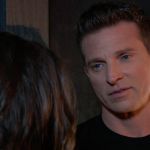 At the hospital, Harrison Chase (Josh Swickard) is on the phone discussing the next moves for Shiloh Archer’s (Coby Ryan McLaughlin) arrest. Jason Morgan (Steve Burton) arrives and wants an update on the situation.

At the Corinthos mansion, Sonny Corinthos (Maurice Bernard) is making food when his daughter Kristina Davis (Lexi Ainsworth) enters the room. Kristina brought by fresh herbs before she leaves to go to work. She gives Sonny a hug and thanks him for always being there for her. Kristina asks about Shiloh and Sonny says her and Sam will need to testify against him.

GH spoilers tease that Jason shows up at the house and they discuss Wiley and his situation. Jason explains that Shiloh never knew about the baby or the adoption.

At the Port Charles elementary school, Willow Tait (Katelyn MacMullen) lets Diane Miller (Carolyn Hennesy) into her classroom. Diane asks if she’s being harassed – Willow says her mom is convinced that she gave birth to a baby and did not lose it. Diane tells Willow that Shiloh is under arrest, but Willow says he will find a way out of this.

Jax and Bobbie have a lot of catching up to do, West Coast. Port Charles has changed a lot since the last time he stopped by.
Tune into an all-new #GH – STARTING NOW on ABC! @IngoRademacher pic.twitter.com/ioUWjheELc

Diane says they need to focus on the baby and how does her mother know about him? Diane says that it is pure speculation on her mother and Shiloh’s part. Willow tells Diane that the records of the birth have already been replaced.

At the hospital, a nurse enters Shiloh Archer’s room and says he needs to rest his soul and mind. Shiloh realizes that’s one of the Dawn of Day practices. The nurse says that this whole thing is a travesty and he looks uncomfortable in his handcuffs. Shiloh tells the nurse that his only task is to find his child’s birth certificate. Shiloh asks the nurse to help him get the information for him.

Chase lists off the offenses that Shiloh is being charged with to Jason. Shiloh is led out of the hospital in handcuffs. Suddenly Harmony appears and says she is the one who drugged Sam and Kristina, not Shiloh.

At the pub, Ava pushes back against Nina and says she’s enjoying treating her this way. Ava says the jokes on her – her daughter is gone and Nina still has hers. Nina says she takes no pleasure in what happened to her. Ava says she does not need the pity and ridicule of a cover story. Nina says she could wear couture and have an opportunity to share her story with the world.

Lucas has a lot of support in his corner… but does anyone really know what'll it take to keep Wiley in his home?
A tense, new #GH starts RIGHT NOW on ABC! @RyanCarnes1 pic.twitter.com/wbnlGqJsaT

Carly tells Julian to butt out of the conversation, Julian says it’s his establishment and he can do as pleases. Carly yells at Julian that he’ the problem and he needs to stay the hell out of it. Julian tells Carly to stop being so high and mighty. Carly is worried that Julian is going to mess up the whole plan.

Kristina shows up and they all do a toast to Shiloh being arrested. Jax explains that he’s staying in town and will be helping out with Josslyn. Bobbie is happy to hear that and says they each deal with grief in their own way. Bobbie explains about Michael and the Wiley situation.

GH spoilers tease that Chase shows up at the mansion and gives an update about Harmony admitting to doing Shiloh’s crimes. Sonny and Jason are furious with this development.

Carly tells Lucas again that Julian may not be the best person to rely on. Kristina goes to take out the bar recycling and Shiloh is standing at the door. Julian comes to the door and tells Shiloh he has to leave, he’s not welcome there.

Shiloh goes outside and calls a birth records office …….flash to preview…

The Young And The Restless Spoilers, Tuesday, June 11: Adam Makes A Play For Sharon –Traci And Jack Visit Dina—Michael Worries About Kevin’s Trouble