The Young And The Restless Spoilers, Tuesday, June 11: Adam Makes A Play For Sharon –Traci And Jack Visit Dina—Michael Worries About Kevin’s Trouble 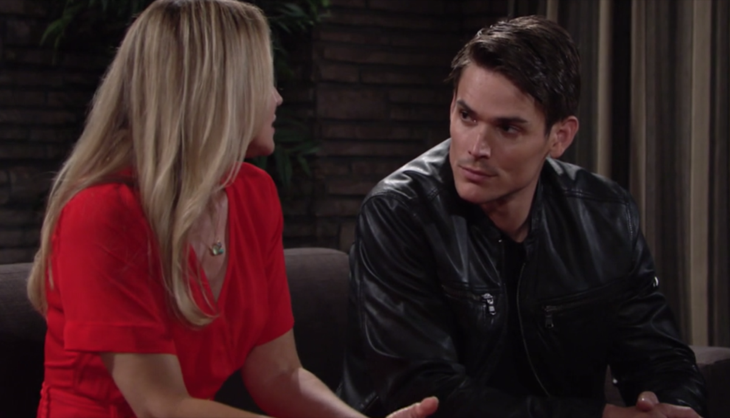 The Young and the Restless (Y&R) spoilers for Tuesday, June 11 tease that Sharon Newman (Sharon Case) and Adam Newman (Mark Grossman) may still have unresolved feelings for each other. Sharon will rage at Adam for threatening to take Christian (Tobias twins) away from Nick Newman (Joshua Morrow).

Adam argues that Christian is his son and he has a right to raise him. After seeing how angry Sharon got with him, Adam questions if she has forgiven him for what he did to her. Of course, Sharon will say that she has, pointing out their relationship was over as he moved on with Chelsea Newman (Melissa Claire Egan).

Y&R spoilers state that Adam seems upset that Chelsea doesn’t want a life with him anymore. And, he doesn’t think that Sharon really loves Rey Rosales (Jordi Vilasuso)—pointing out he is basically “a glorified security guard.”

Y&R Spoilers–Traci And Jack Check In On Dina!

Traci Abbott (Beth Maitland) checks in on her mother, Dina Mergeron (Marla Adams), with Jack Abbott (Peter Bergman) by her side. Y&R spoilers state that Dina will not recognize them. Jack gives her a phone number to call if she ever gets lonely as he knows how it feels to have no one to talk too.

Dina muses that someone as handsome and nice a Jack shouldn’t be single. He seemed to like her comment as he smiled at her. Jack leaves to go to work. Once he gets outside, he decides to stay with his mom. He comes back in and tells Traci work can always wait. Tessa Porter (Cait Fairbanks) shows up to sing for Dina.

At Dark Horse, Nick tries to track down Phyllis Abbott (Gina Tognoni) after she doesn’t return several of his calls. He becomes concerned after his calls are going immediately to voicemail.

Rey arrives at Nick’s office to check in with him. Y&R spoilers state that Nick shares that Adam bought out Dark Horse, but once the company changes hands, he wants Rey to continue to follow Adam. Rey agrees, pointing out he wouldn’t want to work for Adam anyway.

At Society, Nick meets Jack to talk about Phyllis. They wonder if she is just laying low to regroup after everything that has happened. Nick decides to ask Jack for a loan to see if he can get control of Dark Horse again. Jack tells Nick that he doesn’t have that much capital to give, suggesting he should make a deal with Adam.

Nick points out that is not an option in this case. He will not give up his son so he can keep his business.

Next stop, Nick visits Victor Newman (Eric Braeden). He tells his dad he needs his help or he’ll lose Dark Horse. And, as Nick points out, all of this is Victor’s fault for bringing Adam back into their lives.

Victor learns that Adam wants Christian or Dark Horse. Victor refuses to help and points out that Nick has not always been so kind to him. Victor refuses to hand over any money but he said he’s welcomed to come back to NE if he needs a job. This only makes Nick angrier.

Michael Baldwin (Christian LeBlanc) and Kevin Fisher (Greg Rikaart) catch up. Michael teases him about a kidnapping, which puts Kevin on edge. Y&R spoilers state that Kevin shares that his daughter is with a nanny in Portland, which confuses Michael. He doesn’t know why he wouldn’t bring her to see his family unless he’s in trouble.

Throwing it back because these brothers are about to reunite! @gregrikaart returns to #YR tomorrow. 👏 Get ready to see why Kevin is coming back to Genoa City! #TBT pic.twitter.com/fL7OWwlqZR

Lauren Fenmore (Tracey E Bregman) arrives with news that Phyllis is missing. Michael considers Phyllis isn’t missing, maybe she’s avoiding everyone for a while. Paul Williams (Doug Davidson) arrives to ask Kevin to help him with a case. Lauren admits something about Phyllis’ disappearance seems fishy.

Young And Restless Spoilers– Adam Gets Under Sharon’s Skin

Sharon arrives back home all frustrated from her exchange with Adam. Y&R spoilers tease that Rey asks her if everything is okay. That’s when she pulls him close, pulls him upstairs and they make love. Later, Rey asks her if having sex with him was enough to get her mind off Adam.

Sharon comes clean that she saw Adam. Rey thinks Adam is getting in her head and maybe she shouldn’t see him anymore.

Meanwhile, at Adam’s place, Paul arrives to ask him about Phyllis. Paul learns that Adam is moving to the Athletic Club and he was the last person seen with Phyllis. Adam admits they had a minor car crash but she left his place in one piece.

Paul tells Adam to call him if he has any more information. Just after Paul leaves, Nick comes by to give Adam keys to Dark Horse and warns Adam to stay away from Christian.