Days of Our Lives (DOOL) spoilers for Monday, September 9 tease of another exciting episode for the fans with plenty of mysteries, dilemmas, and confrontations among the Salemites!

Viewers will recall from Friday, September 6 that Sarah got a pregnancy test at Salem University Hospital after confiding in Dr. Kayla Johnson (Mary Beth Evans) about her possible predicament. The test did indeed come back positive and according to the timing, she didn’t think it was possible for anyone but Eric Brady (Greg Vaughan) to have fathered the baby.

Sarah will struggle with whether or not to tell him she’s pregnant, because she knows it would only mess up things between him and Nicole – although she may be surprised. If it did mess anything up it wouldn’t be Nicole’s doing, it would be Eric torn between a sense of responsibility to Sarah and his own child and Nicole and Holly Jonas (Scarlett and Harlow Mallory). 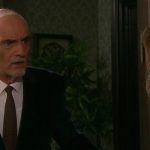 Also near the end of Friday’s episode viewers will recall that Brady Black (Eric Martsolf) walked in on Victor Kiriakis (John Aniston) with a necktie around Ben Weston’s (Robert Scott Wilson) neck, getting ready to strangle him to death while Ben was tied to a chair and unable to defend himself!

Xander Kiriakis (Paul Telfer) had choked him unconscious previously and brought him to the Kiriakis mansion and tied him to the chair, but refused when Victor told him to kill Ben! This scene will continue on Monday, with spoilers indicating that Brady will save Ben’s life by interrupting the process!

Days Of Our Lives Spoilers– Eric Tells Nicole About Sarah

Meanwhile, near Chicago in an abandoned farmhouse, Eric continues to talk to Nicole about his relationship with Sarah. Nicole will want to know about his feelings for Sarah and if he loves her, and Eric will have to decide which woman he wants, although Nicole will be the likely winner!

Nicole won’t blame Eric for any of this since first he thought she was dead and then Kristen DiMera (Stacy Haiduk) came to Salem masquerading as her, and blew him off for Brady!

Elsewhere back in Salem, Ciara Brady (Victoria Konefal) will confront Gabi Hernandez DiMera (Camila Banus) and this is likely to be about Gabi leaving Ciara’s Grandma Julie Williams (Susan Seaforth Hayes) to die in the park adjoining Horton Town Square while she suffered a major heart attack that nearly killed her!

Gabi’s been reamed over previously by Lani Price (Sal Stowers) and even admonished by her husband Stefan DiMera (Brandon Barash) over her insensitivity, although Gabi did have some attack of conscience later when she found out that Julie wasn’t faking after all!

This promises to be a confrontation of epic proportions, since if Gabi had at least called 911 right way Julie wouldn’t have so much damage to her heart that she needs a transplant that she can’t get!

Stay tuned to Days of Our Lives and keep checking DOOL spoilers frequently for all the latest news, updates, and developments!