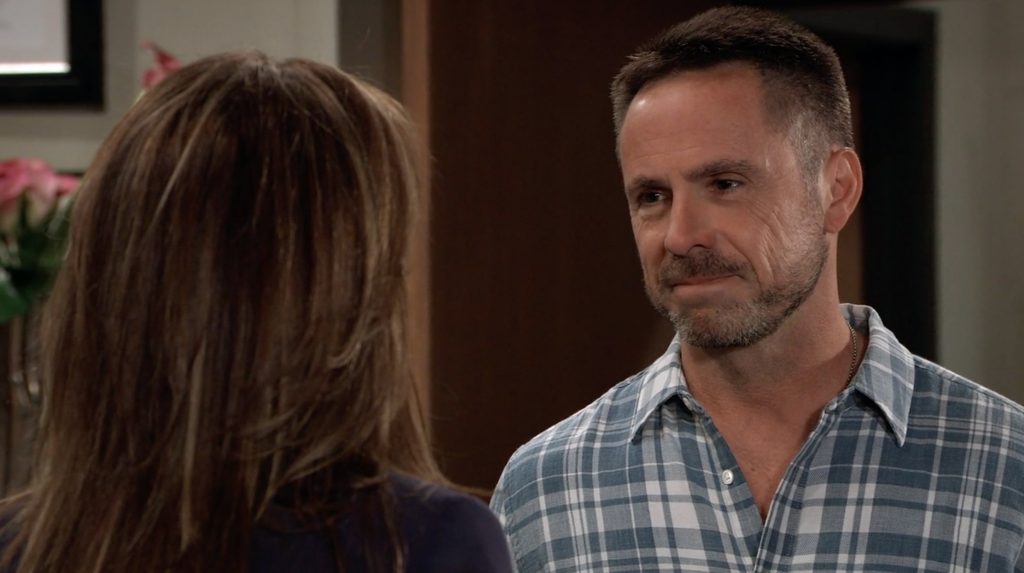 Welcome to your Friday September 13th General Hospital (GH) recap! We begin our day at Kelly’s Diner, Where Maxie Jones (Kirsten Storms) and Jasper Jax (Ingo Rademacher) are debating his choice of restaurant. TV star Tamron Hall walks in and tells them how excited she is to be in Port Charles.

At the coffee shop, Laura Spencer (Genie Francis) asks for an update on Drew Cain (Billy Miller) – Curtis Ashford (Donnell Turner) says they are calling off the search. Laura says she is sorry to hear that and Curtis asks her for more info on Helena Cassadine.

At Wyndemere, a tailor is fitting Peter August (Wes Ramsey) and Valentin Cassadine (James Patrick Stuart) for his wedding. Peter says he is honored to be his best man and asks if there’s anything at all that Valentin needs him to do.

At General Hospital (GH) , Nina Cassadine (Cynthia Watros) and Michael Corinthos (Chad Duell) are helping Sasha Gilmore (Sofia Mattsson) walk down the hallway. Nina says they will be watching her like a hawk during recovery, which Liesl Obrecht (Kathleen Gati) agrees with.

They realize Liesl is drunk and she swears she did not drink that much. Suddenly Lucy Coe (Lynn Herring) appears and says to Sasha that she’s going to change her life. Lucy mentions she has a large inheritance and wants to use it to restart Deception. Sasha says that she will need some time to consider being the Deception model.

GH Recap – Brad Cooper is on a mission

At Charlie’s Pub, Brad Cooper (Parry Shen) and Lucas Jones (Ryan Carnes) show up with baby Wiley. They have popped by to say hi to Julian Jerome (William DeVry). When Lucas walks away, Brad asks him if he’s made a decision about killing Obrecht. Julian tells him that it’s tempting, but he is starting a new life with Kim.

Brad says if Sonny finds out what they did, he could end up floating in the Hudson River. Julian says Sonny would only know, if he ratted him out.

At Kelly’s Diner, Maxie is blabbering on and on and on and then finally Jax intervenes and they ask Tamron if she would like to be on the cover of Crimson magazine. Jax says he wants to feature someone amazing on the October cover, like her.

Laura says she does not won’t divulge any more information about Helena until she knows who Curtis is working for. Curtis says he cannot violate the agreement with his client, but will tell her it’s a secret document. Curtis asks Laura to help and she says she will search Wyndemere and the Haunted Star for him.

At Charlie’s Pub, Lulu Spencer (Emme Rylan) is doing some work when Dustin Phillips (Mark Lawson) appears. She invites him to sit with her and he says she’s been on his mind all day. Dustin says he enjoyed her article on wine tasting and she says she would rather be writing about crime. Lulu reveals that she owns the Haunted Star and invites Dustin to come look at it.

Will Shiloh throw Peter under the bus during court on #GeneralHospital? #GHhttps://t.co/s6ivUhe4Dr

At Wyndemere, Valentin Cassadine (James Patrick Stuart) says he is fine, but Peter August (Wes Ramsey) knows Liesl has been holding a secret over his head. Valentin tells Peter that he has already told Nina about the secret.

Julian stops by Alexis Davis’s (Nancy Lee Grahn) office and tells her that he’s not going to wait on the closing docs, him and Kim are leaving. Julian says he came by to say a formal goodbye to her and they have a tearful goodbye.

Dustin suddenly kisses Lulu and they begin to make out as someone secretly watches.

Liesl takes Sasha aside and tells her that she cannot be the face of Deception. The public will find out the truth about her eventually as Michael walks around the corner.

Curtis and Laura arrive on the Haunted Star and begin their search. They arrive at an estate room and open the door, Laura gasps……….flash to preview