Welcome to your Friday, June 14 General Hospital (GH) recap! We begin our day at the Metro Court, where Jason Morgan (Steve Burton) and Sam McCall (Kelly Monaco) are relishing in the fact they don’t have to hide their relationship. Jason says he’s happy about their situation, but he’s mad that Shiloh Archer (Coby Ryan McLaughlin) is walking free.

At General Hospital (GH), Micael Corinthos (Chad Duell) reads the court document to Willow Tait ((Katelyn MacMullen). They need to show up to family court as Shiloh Archer walks by and stares at them.

Nelle Benson (Chloe Lanier) is at Pentonville when Brad Cooper (Parry Shen) shows up in disguise and asks for her help.

GH Spoilers– Jordan Has A Long Road To Recovery

At General Hospital (GH), Jordan Ashford (Brianne Nicole Henry) has been moved to a recovery room. Her husband Curtis Ashford (Donnell Turner) gets her settled and they share a kiss. Curtis grabs her paperwork away and sees she has medical bills.

Curtis wonders where the bills came from and what exactly does she owe? She says figuring out the bills are a reality they need to face. Curtis looks at the bills and is upset at how expensive they are. Jordan begins to freak out that maybe they are in a financial tailspin. 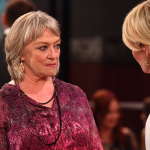 At the metro court, Sam McCall and Jason Morgan are having lunch together while discussing the baby Wiley situation. Carly Corinthos (Laura Wright) approaches and tells them not to focus on the worst case scenario. Jason explains to Carly that they got rid of any adoption paperwork. Sam says that Dawn of Day is starting to unravel slowly. Jason worries that Shiloh is unraveling and wants the baby.

Willow Tait grabs the summons from Michael Corinthos and starts to walk away – he goes after her. She says she’s going to tear it up and throw it in Shiloh Archer’s face. Willow says he knows the baby survived and he’s going to come for Wiley. Michael says the info could be thrown out if it was not obtained legally. Michael says his parents are free and that’s proof enough that Diane Miller knows what to do.

Something about Ryan's sudden change of heart isn't sitting well with Jordan. And she's finally ready to put her detective skills back to work.
A dramatic, new #GH starts RIGHT NOW on ABC! @Bri_Nic_Henry pic.twitter.com/scTdq6voOz

Willow says Shiloh will never get his hands on Wiley.

At Kelly’s pub, Margeaux Dawson (Elizabeth Hendrickson) is with Lucy Coe (Lynn Herring) and is signing legal papers to sell her home. Lucy thinks she can get her top dollar for her home and Margeaux says “the sooner the better.” Suddenly Shiloh Archer walks into the café and stares right at her.

Lucy leaves and Shiloh approaches her table to harass her. She figures out that Harmony lied for him and he is not a messiah. Margeaux says he is delusional and DOD is abandoning him. Margeaux says she’s leaving Port Charles and he says she will be back to DOD someday.

At Kelly’s Lucy Coe sees Josslyn Jacks (Eden McCoy) and asks how she is doing. Josslyn says she’s doing okay and that she needs Lucy’s help. Josslyn asks how she can contact someone who has “passed over.” 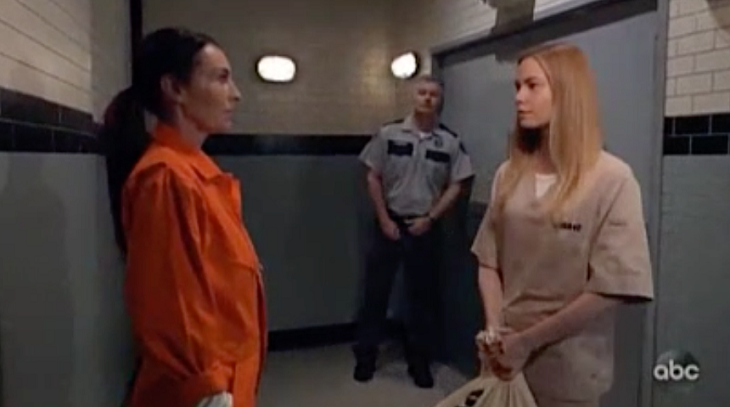 Nelle Benson asks Brad Cooper why he is so nervous and upset. Nelle asks what is wrong with her baby. Brad explains the birth mother Willow has been poking around and the birth father has been as well. Nelle asks Brad if Michael is really over her?

At PCPD, Willow meets with her mother Harmony and tells her about the summons. Harmony says she plead guilty and will be headed to Pentonville.

At the Metro Court, Margeaux approaches Jason and ask to speak with him about Shiloh. She says she discovered some info about Shiloh – he’s used members to cover for him before.

Josslyn asks Lucy to see if she can reach out to Oscar from the beyond. Lucy says it’s too soon and she needs to live her best life.

Nelle tells Brad that she is his greatest ally and that bitch Carly will never get her hands on Wiley. Brad leaves and Nelle meets her new roommate – HARMONY!…….flash to preview…

Days of Our Lives Spoilers: Rex & Sarah Scramble To Create An Antidote For Will