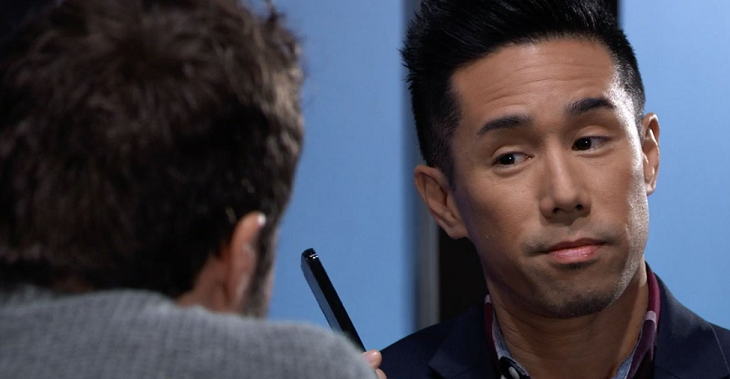 General Hospital spoilers tease that it will only be a matter of time before Brad Cooper will have to explain himself after the truth about Baby Wiley comes out.

After all, even viewers know the best-kept secrets in Port Charles come out on way or another. However, in this case, there’s a chance Brad won’t end up being vilified for what he’s done. Here’s why.

“It wasn’t as premeditated as agreeing to switch lab results or something like that. It was an emotional moment that snowballed,” Parry Shen, who plays Brad on the hit ABC soap, tells Soaps in Depth in a new interview.

“Nelle said the right things that Brad needed to hear at that time. The baby just sort of fell into his lap, wounded up sort of letting things happen.”

“The tipping point for him was when he had the heart to heart with Britt. She sort of honed in on something for Brad to focus on – that Wiley will be safer away from all the dangers that go with Being a Corinthos. It just goes to show why they are such good friends,” Shen added.

“Then he and Lucas made Michael the godfather so Wiley would be seeing Michael as much as he possibly could without him knowing he’s actually his father. In a sense, that’s a compromise Brad is willing to live with.”

At this point, it’s safe to say it will only be a matter of time before the truth comes out. And when it does, prepare for fireworks.

Luckily, Shen knows that his character might have some support on his side, seeing how a few other Port Charles residents have done something similar in the past – both Carly Corinthos (Laura Wright) and Bobbie Spencer (Jacklyn Zeman).