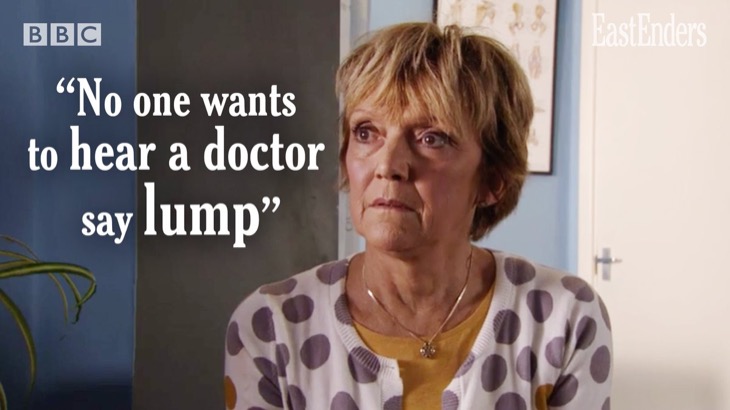 If there is one thing that the resident of Walford is very good at doing, it’s hiding major secrets from their loved ones. This time around Eastenders Spoilers indicates that Jean Slater (Gillian Wright) is hiding her huge cancer secret from her close family and friends, yet it will only be a matter of time before everyone figures out what is going on. Here’s what you need to know.

Jean (played by actress Gillian Wright) has been suffering from plenty of different symptoms for some time now, but she’s been keeping the pain to herself. During her appointment with her doctor, Jean is left in shock when she is told that she has to undergo further testing. Eastenders spoilers tease that she will be diagnosed with ovarian cancer.

Jean decides to keep this devastating news to herself because she feels as though her family has already gone through enough. To complicate matters even more, Jean has to deal with another situation as Hayley is preparing to return from the hospital. Unfortunately, there’s very little chance that everything will go according to plan as Hayley’s life has been one big mess lately.

Hands up if you want to spend #Valentines with Jean? 🙋#EastEnders pic.twitter.com/G8CopoUDhb

Of course, Jean knows that she won’t be able to keep her cancer news to herself for very long, especially as her health will be deteriorating in the coming weeks. As much as she is needed by her family, she will need just as much help from them, too.

Fans will simply have to tune in to find out what will happen next! Eastenders airs weeknights on the BBC network. Check your local listings for times. In the meantime, let us know what you think by leaving us a line with your thoughts in our comments section below. And as always, come back to Soap Opera Spy for all the latest news, updates and spoilers on Coronation Street, Eastenders and all of your favorite daytime television shows right here.

Bold and The Beautiful Spoilers: Thomas Forrester is Back What Does That Mean For Sally and Wyatt