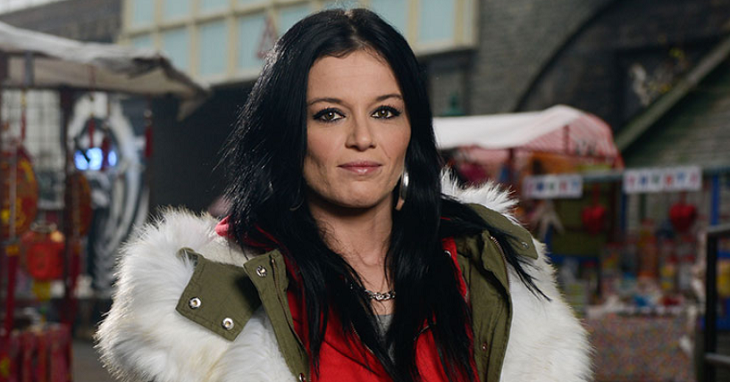 EastEnders star Katie Jarvis (Hayley Slater) has recently had to deal with a little off-screen drama in her personal life. That’s because the actress was attacked during a night out on the town with her friends. Here’s what you need to know.

According to the BBC, Katie Jarvis was enjoying a ladies’ night out with her best girlfriends when someone decides to attack her with glass. She didn’t go into detail as to what had happened, but she was definitely left shocked over the incident.

Apparently, an intoxicated man threw glass in her direction last Friday night. The actress was hospitalized following the incident and posted a tweet thanking the police and ambulance for their services. She didn’t say if the man who threw the sharp objects at her was arrested or if there is a police investigation over the matter.

The tweet read: “Big thank you to the Met police tonight and ambulance service for looking after me after I was glassed by a drunken Irish man for f*** all.”

The brunette beauty later updated her fans on her Twitter account and said that she was feeling “good as gold” a few hours following the attack. She also thanked her fans for showing concern for her well-being.

Katie Jarvis wrote to her fans, “Ok to put people’s minds, and questions to rest. I am absolutely fine thank you so much for all your concern and checking in on me but I’m a soldier and been through hell of a lot worse. Now you can start focusing your concerns on some real new. Love you all.”

EastEnders Spoilers – Soap Hasn’t Specified When Jarvis Will Be Back

So far producers for Eastenders have made no comments about the incident. Katie Jarvis, meanwhile, is not expected back on the soap anytime soon as her character Hayley is currently seeking treatment for her mental health and alcohol issues.

The soap also hasn’t specified when she is due back on set, either. Jarvis also hasn’t made any comments as far as what to expect from her character next.

There are TWO episodes of #EastEnders tonight.
7.30pm and 9.00pm. @BBCOne. pic.twitter.com/vSOVU3RlZv

In the meantime, don’t forget to check back with Soap Opera Spy for all the latest news and updates on Eastenders right here.