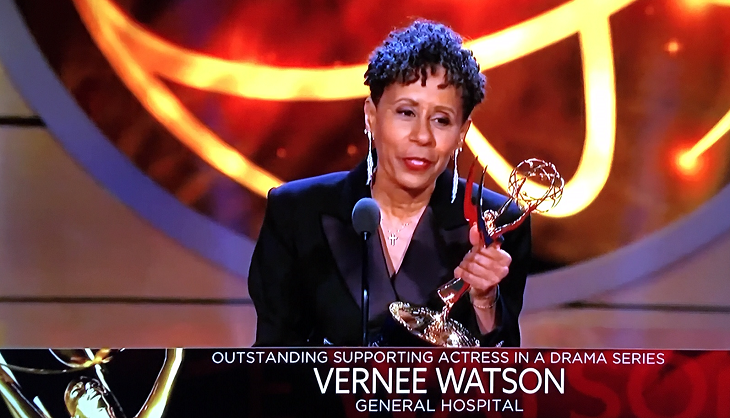 Vernee Watson has won the Daytime Emmy Award for Best Supporting Actress for her portrayal of Stella Henry on General Hospital. This is her second Emmy in a row as she won last year for Outstanding Guest Performer in the same role.

Watson’s Emmy reel highlight Stella being arrested for assaulting a man who she said had stolen her purse. She tried hard to explain to Sonny Corinthos (Maurice Bernard) all the problems he would face in trying to provide care for his father Mike Corbin (Max Gail), who had developed Alzheimer’s disease.

Stella was also surprised to see a man from her past named Yvonne and tried to explain to Sonny the difficulties he will face in providing care for his father, who had been diagnosed with Alzheimers.

While asking Mike about his new lady friend, Stella was surprised to see a man from her past named Yvonne. T.J. Ashford (Tequan Richmond) asked Stella to reconsider her decision not to attend Jordan Ashford (Briana Henry) and Curtis Ashford’s (Donnell Turner) wedding.

Stella, Curtis, and Jordan also attended a family counseling session — and it didn’t go as well as expected.

Watson has been acting for decades. She had a recurring role on Welcome Back Kotter and played Viola Smith on The Fresh Prince of Bel-Air from 1990 to 1996.

General Hospital Spoilers – Watson On Many Other Shows

She had guest roles on Good Times, The Love Boat, Fantasy Islands and What’s Happening in the 1970s and 1980s.

Congratulations to Vernee Watson on her Outstanding Supporting Actress win!

Don’t forget to check often with Soap Opera Spy for all the latest General Hospital news and spoilers.