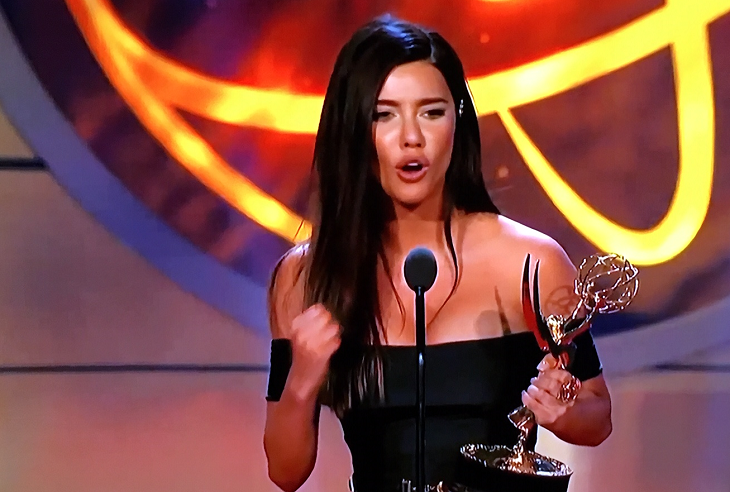 Jacqueline MacInnes Wood has won her first Daytime Emmy Award for Outstanding Lead Actress for her portrayal of Steffy Forrester on the Bold And The Beautiful.

Wood’s Emmy Reel contained her heated exchange with husband Liam Spencer (Scott Clifton) after she revealed that she had slept with his father Bill Spencer (Don Diamont).

She begged her husband to forgive her but ended up on her knees weeping outside their home as he left.

Let’s go @JacquelineMWood! She received the #DaytimeEmmy Award for Outstanding Lead Actress in a Drama Series. Let’s give her a round of applause! 👏 #BoldandBeautiful pic.twitter.com/qgN9OuZv6V

The other episodes in her reel included when she gave birth to she and Liam’s daughter Kelly, when Liam takes off his wedding ring and presents her with annulment papers and when she rages to Bill after she catches Liam and Hope Logan (Annika Noelle) making out in a dressing room.

A fan favorite episode and reel was a calm and composed Steffy, as she tells Liam she is done competing for her and she decides to put herself and Kelly first.

Bold And The Beautiful News – Wood Returns On May 23

Wood went on maternity leave in February, and she gave birth to her first son in March. Steffy was last seen on The Bold and the Beautiful on March 18.She returns to B&B on May 23.

Don’t forget to check often with Soap Opera Spy for all the latest Bold And The Beautiful news and spoilers.