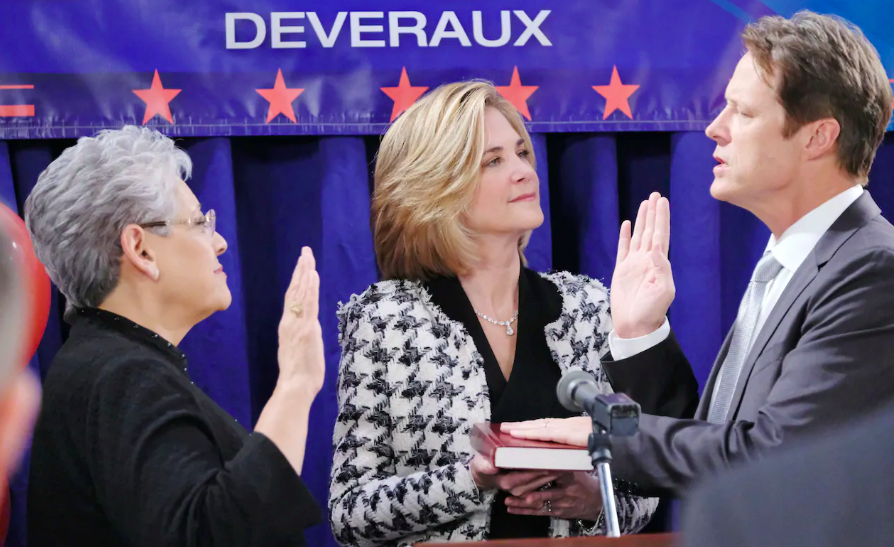 “Days of Our Lives” spoilers for the week of May 20-24 tease that Jack Deveraux (Matthew Ashford) will make a bold move in his first appointment as mayor. Before he makes this crazy decision, he’ll actually try making a reasonable one. Jack recently fired Hope Hernandez (Kristian Alfonso), so he’ll go to Rafe Hernandez (Galen Gering) and wonder if he’d be willing to replace her.

Rafe would actually be qualified for the job, but it’s tricky since he’s in the process of divorcing Hope. He won’t want to pour salt in the wound and stir up more trouble. Besides, Rafe isn’t a big fan of Jack at the moment. Jack has become one of the most annoying men in Salem, so that’ll factor in Rafe’s choice to decline. “Days of Our Lives” spoilers say he’ll think it’s an all-around bad idea.

Jack will weigh his options and decide Eve Donovan (Kassie DePaiva)  is the perfect fit. She doesn’t have a background in law enforcement, but that’s not necessarily a requirement here. Jack will feel like Eve is just the no-nonsense gal Salem needs. He’ll suggest Eve will be tougher on crime than Hope and solve more cases, but he’ll mostly just want to please his wife.

Days Of Our Lives Spoilers: Jack Deveraux Believes Eve Donovan Has His Best Interest At Heart

Jack may believe Eve has his best interests at heart, but she’s clearly looking out for number one. She certainly won’t be looking out for Salem’s residents. Nevertheless, “Days of Our Lives” spoilers state that Eve will enjoy her power trip. She’ll tell Hope she’s going to need her gun and her badge, so Hope will hand them over. There’ll be plenty of tension between Hope and DOOL’s new commish!

In the latest #DAYS, the mayoral election results are announced, and there is a surprising winner.https://t.co/ZsCmioRrzb pic.twitter.com/HSuCjqG61M

“Days” spoilers say Eve will think she’s the ideal woman to shake up the police department. However, she’ll quickly commit some crimes herself. Eve will attack Ben Weston (Robert Scott Wilson) in the square and ultimately try to frame him for the cabin fire. She’ll do whatever it takes to destroy her daughter’s killer.

It sounds like things are about to heat up on the NBC soap. We’ll give you updates as other “Days” news and rumors emerge. Stay tuned to DOOL and don’t forget to check Soap Opera Spy often for the latest “Days of Our Lives” spoilers, rumors, updates and news.