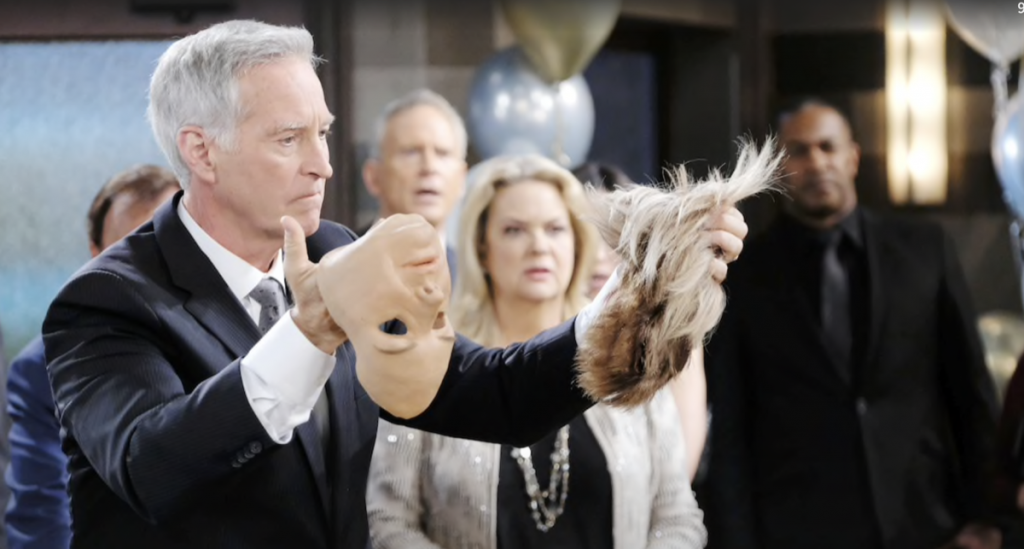 Days of Our Lives viewers will recall from recent episodes that Hope Brady (Kristian Alfonso) asked John Black (Drake Hogestyn) to help her find Ted Laurent’s (Gilles Marini) killer, and that the two put the squeeze on Xander Kiriakis (Paul Telfer) and that he agreed to make a deal with them. Xander flips on Kristen and tells the police everything. Meanwhile, John and Marlena Evans’ (Deidre Hall) anniversary party is happening over at Doug’s Place and Hope gets word that Xander has named Kristen as his boss. Hope interrupts John at the party to tell John the important news.

More than likely, Eli will not just take the word of Xander, a convicted felon and con man and do some investigation of his own before he tells Hope. He will do his checking and find out that Kristen really is alive, and then he will tell Hope, who will then tell John, and the two will put two and two together and realize that “Nicole” is really Kristen, and that explains all of her bizarre behavior since she’s come back to Salem!

Perhaps Xander will have told about the masks that Dr. Wilhelm Rolf (William Utay) had designed for facial reconstruction and that Kristen was wearing one to masquerade as Nicole. Dr. Rex Brady (Kyle Lowder) had a copy of Rolf’s book on how to make those, as Days of Our Lives viewers will recall from a couple of months ago, but he may have either taken it with him or it could also have been taken in the raid that Eve Donovan Deveraux (Kassie DePaiva) set up to destroy the amnesia serum and any notes concerning it.

The Real Susan Banks Will Be At The Anniversary Party Also

All through the party “Nicole” has seemed to be a topic of conversation among different guests who make comments about her to John, including the real Susan Banks (Stacy Haiduk) who ran into Kristen disguised as her the last time she was in Salem, but Kristen wiggled out of the problem by claiming to be Susan’s sister, a nun, Sister Mary Moira Banks who escaped the convent and her vows of chastity to meet a boyfriend! 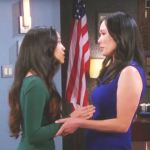 She had fooled Susan for the time being, but she could have heard from her sister and also talked to John about Kristen having been in Salem and having impersonated her! Among the guests will be Sonny Kiriakis (Freddie Smith) who will, of course, have Will Horton (Chandler Massey) with him, and they might talk about their weird experiences with “Susan” as well! This will seal the deal to John and Hope as to who “Nicole” really is because it’s not the first time Kristen impersonated Susan and John will confront “Nicole” right there at he and Marlena’s anniversary party!

Kristen’s arrest will be coming soon and she will soon be exposed for who she is, although most Salemites know what she is! Stay tuned to Days of Our Lives and keep checking Days of Our Lives spoilers frequently for all the latest news, updates and developments!