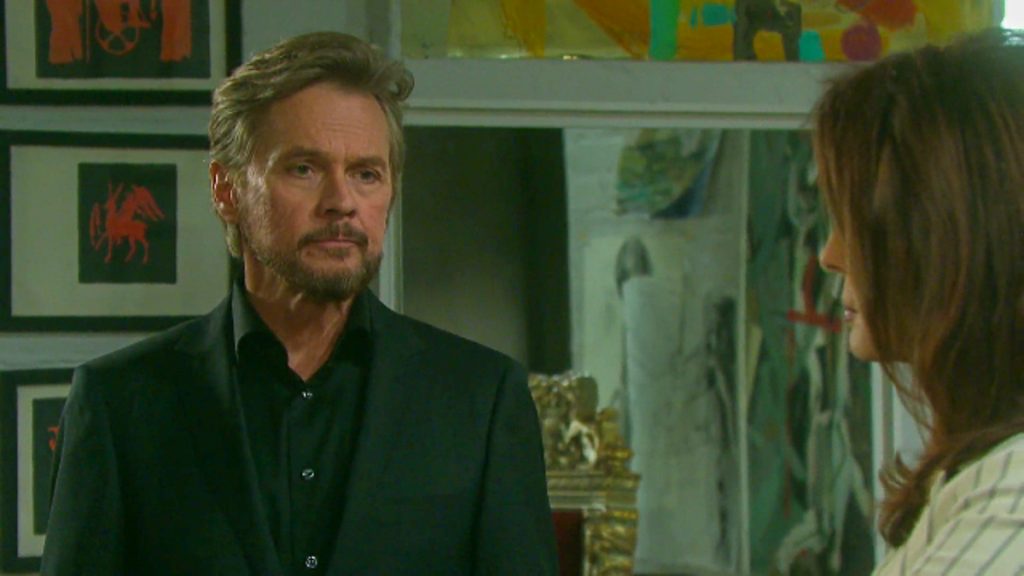 Days of our Lives (DOOL) spoilers tease that’s it only a matter of time before Steve Johnson (Stephan Nichols) resurfaces in public in Salem. Viewers knows that Steve currently believes himself to be Stefano DiMera (Joseph Mascolo) due to Wilhelm Rolf’s (William Utay) memory transfer process.

Once Kayla Brady (Mary Beth Evans) sees Steve, she will be angry and confused. Steve now has both eyes functioning, again thanks to Dr. Rolf. Steve missed his own sister’s funeral, so that will anger Kayla, not to mention Steve’s brother Jack Devereaux (Matthew Ashford). If the Stefano persona decided to impersonate Steve, he will have a lot of questions to answer. Kayla won’t believe that Steve could be so cold.

DOOL Spoilers – “Steve” Johnson may have to take other action

So “Steve” may have to take other steps to push Kayla away. Pretending to date Kate DiMera (Lauren Koslow) may be exactly what Steve has to do, but even still, Kayla will want to know what has caused such a change in the man she loved. But Justin Kiriakis (Wally Kurth) will soon go frustrated with Kayla. Steve is the one who left her, and she has a new life now. He will believe that she should focus on that.

But no matter how much Justin prods her, or how hard “Steve” tries to push her away, Kayla won’t be able to walk away, at least until she knows how the man she loved so much could be so different now. But will Justin stand by her or will he eventually have had enough?

Will Steve Johnson finally resurface in Salem? How will he account for missing so much, including his own sister’s funeral? Will Kayla buy Steve’s story or will she look for another answer? Could this be how Stefano DiMera is revealed to Salem at large? Only time will tell, so stay tuned to Days of Our Lives airing weekdays on NBC. And don’t forget to check back here regularly for all your Days of Our Lives news, information and spoilers!

Bold And The Beautiful Rumor: Is Thomas Secretly Plotting To Kill Brooke, And The Logan Women?