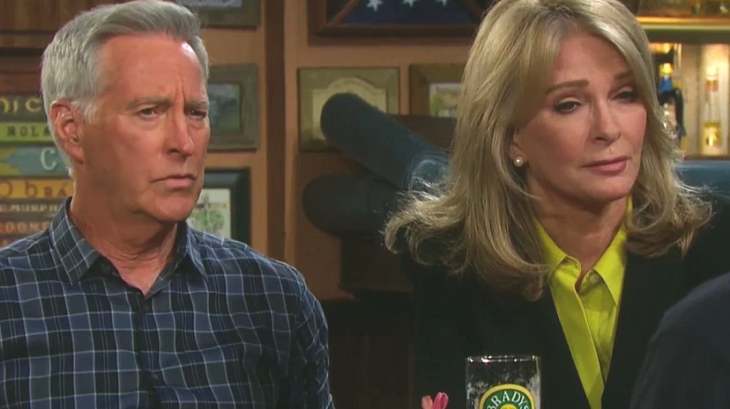 Days of Our Lives spoilers tease that Will Horton (Chandler Massey) will do something very un-Will like this week, and lash out at his Grandma Marlena Evans (Deidre Hall)!

He will probably be quite ashamed of himself and not know where it came from. Although Marlena will more than likely realize it’s the brain tumor talking. She will reassure him that she’s counseled patients with tumors before. His affects the area of the brain associated with impulse control. She understands not to take it personally, and neither should he.

Days of Our Lives viewers will recall that a few weeks ago Will also had a lashing-out episode when he was with his partner, Sonny Kiriakis (Freddie Smith). Dr. Rex Brady (Kyle Lowder) had mentioned that emotional outbursts are common with patients who have brain tumors affecting the area of the brain that Will’s is in. So Marlena will be telling him the same thing Rex did.

Days Of Our Lives Spoilers – No Cure For The Tumor

Will and Sonny are understandably frustrated that there seems to be no cure for the tumor, and that it is even caused by all that amnesia serum that Will took that Dr. Wilhelm Rolf (William Utay) had developed.

The problem is, there is no easy answer to this tumor and its effects. It is not reduced by radiation, and in fact radiation seems to be connected with Will having short-term memory problems. It’s like the radiation is reversing the serum’s effects instead of the tumor!

Days Of Our Lives Spoilers – Memory Over Side Effects?

He could be faced with choosing memory over the tumor and it’s other side effects on him such as headaches, seizures, and emotional control. Not to mention other side effects that components of the serum could cause that have not manifested themselves yet.

His care team, including and especially Dr. Kayla Johnson (Mary Beth Evans) have been researching what to do for Will. Kayla is also trying to see what else she can determine from his brain biopsy cells. But if Rolf’s diary with the actual formula would turn up somewhere it would be much more preferable and quicker.

Days of Our Lives #DOOL Spoilers: John And Marlena Race To Save Will – #Jarlena A Force To Be Reckoned With @celebratesoaps https://t.co/MKOnsMIQUr

Other spoilers tease that Marlena will work with her husband John Black (Drake Hogestyn) to find the diary. Stay tuned to Days of Our Lives and keep checking Days of Our Lives spoilers frequently for all the latest news, updates, and developments!