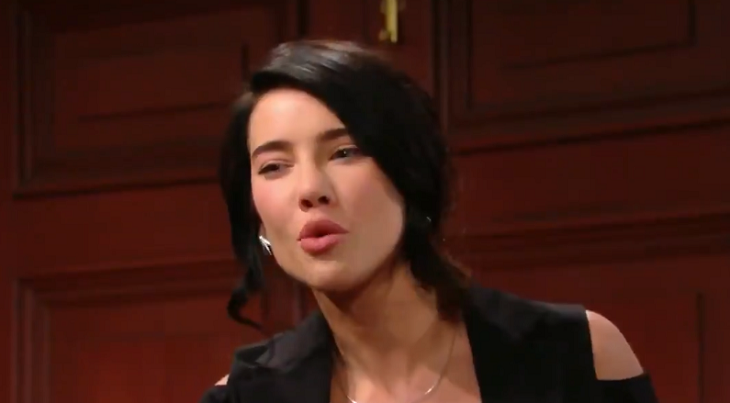 The Bold and the Beautiful rumors indicate that Thomas Forrester (Matthew Atkinson) will have some help in his plan to break up Liam Spencer (Scott Clifton) and Hope Logan (Annika Noelle).

Ever since he arrived back in Los Angeles, Thomas has formed a close bond with Hope. She’s become a source of comfort to him and his son Douglas Forrester (Henry Joseph Samiri) as they grieve the loss of Caroline Spencer (Linsey Godfrey).

But Thomas’ friendship with Hope is starting to turn into an obsession. He wants to have a romantic relationship with Hope and feels she would be a great mother to Douglas. Thomas has started manipulating Hope and is trying to drive a wedge between her and her husband Liam.

Cracks were already forming in Hope and Liam’s marriage before Thomas arrived, but his scheme has caused further strain for the couple. Despite Liam’s warning to back off, Thomas is going to continue with his plan and he may soon have help from his own sister Steffy.

Bold and the Beautiful Weekly Spoilers May 20 To May 24: Steffy Returns- Thomas Continues To Manipulate Hope- Hope & Liam’s Marriage Crumbles

This week, Steffy returns from Paris. She went on a months-long business trip with her daughters, because she felt Hope and Liam needed time for themselves to work on their issues. Now that she’s back and sees the damage that Thomas’ scheming has caused, there’s the question of what will she do.

Steffy loves Liam and always will. She wishes they could be a family and raise their daughter Kelly Spencer (Zoe Pennington) together. But Hope remains an issue for them. Thanks to Thomas, it looks like Steffy may get her wish.

Bold And The Beautiful Spoilers – Will Plan The Backfire?

Seeing the trouble that Hope and Liam are going through, Steffy will try to do everything she can to help. However, there’s a part of her that will see this has an opportunity in trying to woo Liam back.

Steffy knows what Thomas is doing is wrong, but if it will help reunite her family, she could be tempted to go along with his plan.

Do you think Steffy will help Thomas with his scheme? Do you think they’ll succeed in their plot to break up Hope and Liam? Or will their plan backfire?