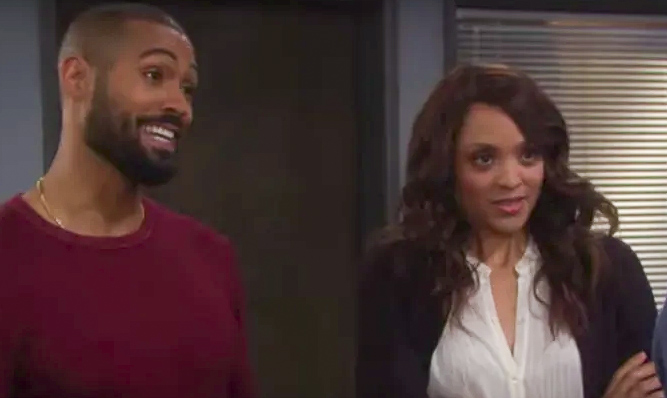 Days of Our Lives spoilers for Wednesday, October 9 tease of another exciting day full of drama and tense situations among the Salemites!

As Days of Our Lives viewers know, Stefan DiMera (Brandon Barash) is now brain dead, and his heart may be a donor match for Julie Williams, (Susan Seaforth Hayes) who desperately needs a new heart, is too old for the traditional transplant list, and has slipped into a coma after having two heart attacks.

Her grandson, Eli Grant (Lamon Archey) pleads with Stefan’s wife, Gabi Hernandez DiMera (Camila Banus) to save Julie’s life by donating Stefan’s heart. Gabi is having none of it, not being able to come out of denial that Stefan will not come back to her! She has been told there is no coming back after it has been determined that there is no neurological activity in Stefan’s brain but she can’t fathom a future without him!

Elsewhere, Ciara Brady (Victoria Konefal) finds herself in much too close of quarters with Jordan Ridgeway, (Chrishell Hartley) who has tried to kill her several times and has implied threats as well. The most recent time was when Ciara was nearly run over outside of Brady’s Pub at night, but she and her boyfriend and Jordan’s brother, Ben Weston (Robert Scott Wilson) have so far been unable to prove that it was Jordan at the wheel! Ciara will feel Jordan is much too close for comfort!

Over at the Kiriakis mansion, Ben is desperate to protect Ciara from his psycho big sister and seeks out Victor Kiriakis (John Aniston) for his assistance in eliminating Jordan! Victor is Ciara’s grandfather and viewers will recall that in episodes a couple of weeks ago, Victor had tried to eliminate Ben to protect Ciara! Ben will try to convince Victor that Jordan is a much more real threat to Ciara, considering she had tried to kill her at least twice before and possibly a third with the attempted rundown, which Ben may also mention to Victor, but that they can’t prove it was her as yet.

Dr. Wilhelm Rolf (William Utay) will lure Hope Brady (Kristian Alfonso) into a trap, injecting her with an unknown serum to achieve as yet unknown results! The Days of Our Lives fall preview seems to indicate that Rolf wants to turn her into Princess Gina, but the reason why is as yet unclear, and John Black (Drake Hogestyn) and Marlena Evans (Deidre Hall) will notice that Hope is not quite herself and will become very concerned! It may take awhile for the serum to effect the changes, however, and Marlena and John will start investigating!

The Bold and the Beautiful News: Lawrence Saint-Victor Talks His Favorite Role – Being a Husband and Father