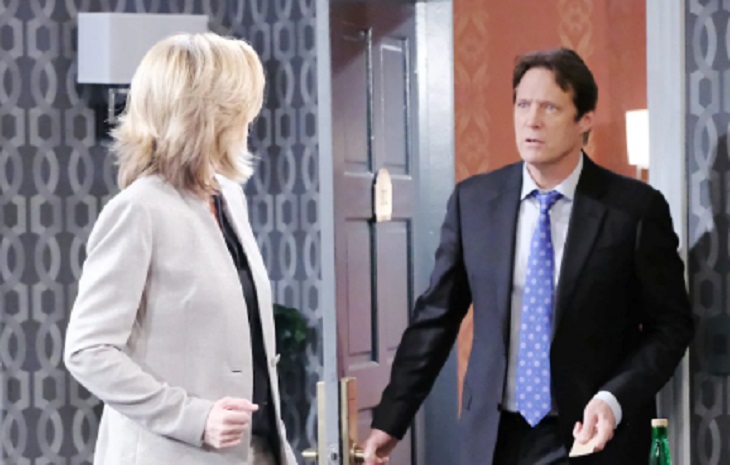 Days of Our Lives spoilers for Wednesday, July 24 finds Xander Cook (Paul Telfer) and Red Brady (Kyle Lowder) getting into it over Sarah Horton (Linsey Godfrey). Also, Jack Deveraux (Matthew Ashford) is surprised to find out that Eve Donovan (Kassie de Paiva) is actually supporting him with his plans to take the serum in order to regain his memories. Jennifer Horton (Melissa Reeves), meanwhile, is moving on with her life and has a date planned with Dr. Henry Shah (Andre Khabbazi). Haley Chen (Thia Megia) is still having nightmares about Claire Brady (Olivia Rose Keegan).

Days of Our Lives Spoilers – It’s Rex vs. Xander And Eric

Even though Sarah Horton married Rex Brady, she’s got not just one other man trying to win her affections, but two. This episode will see her new husband Rex battling things out with a very jealous and a very persistent Xander Cook. But Xander isn’t the only person that Sarah has to worry about. That’s because Eric Brady (Greg Vaughan) still can’t shake his feelings off for the beautiful brunette. Xander, meanwhile, just can’t stop thinking about the passionate night that the two shared together before Sarah decided to shack up with Rex.

Elsewhere, Jack will be surprised when Eve shows her support when he says that he wants to use the serum in order to regain his memories. However, it will be a short-lived moment. As manipulative as Eve is, she will turn things around and try to stop Jack from remembering his past.

Not only is she worried that she might lose her position as one of the most powerful women in Salem, but that Jack might also remember just how much he really despises the woman. That’s why Eve will decide to do whatever it takes to make sure that the new Jack doesn’t remember anything about the old Jack. She will even try to trick Jack by giving him a fake serum.

Days of Our Lives Spoilers – Jennifer Is Moving On

And while Jack’s ex Jennifer Horton might have tirelessly worked in trying to convince Jack to come back to his senses, she’s totally given up on him. As a matter of fact, she’s even moved on. Days of Our Lives spoilers tease that she will go on a hot date with Dr. Henry Shah, which will leave Jack even more curious about the life he might have had with Jennifer in the past.

Haley, meanwhile, is still having nightmares about a knife-wielding Claire Brady. Not only does she have PTSD, but she just can’t shake off images of Claire in her head. Lani Price (Sal Stowers) will try to squeeze some information out of Ted Laurent (Giles Marini) and when she does, she will realize that his version of the story simply doesn’t add up.