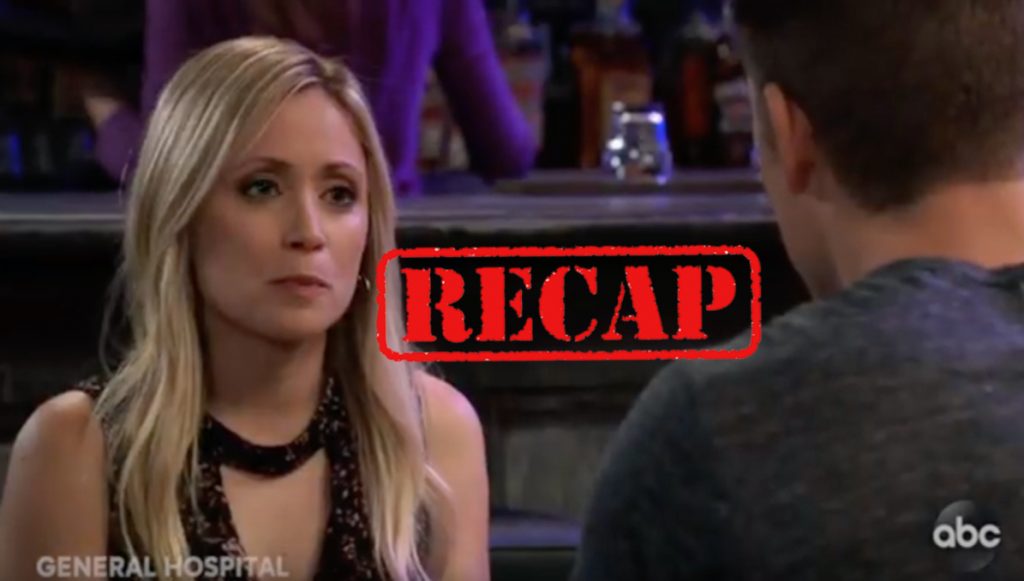 Lulu Falconeri (Emme Rylan) is on her couch crying when there is a ring at the door. She answers and its Peter August 9Wes Ramsey) and Maxie Jones (Kirsten Storms) – she slams the door in their face.

At Kelly’s Diner, Michael Corinthos (Chad Duell) and Sasha Gilmore (Sofia Mattson) are getting breakfast. He tells her that they need to postpone the Puerto Rico trip.

Outside Kelly’s, Dev (Ashton Arbab) and Josslyn Jax (Eden McCoy) are arguing about why she doesn’t let him drive her places. Josslyn says she doesn’t care how many cars he stole in Turkey and he interrupts reminding her he’s now from New York. As they argue, Cameron Webber (William Lipton) and Trina Robinson (Sydney Mikala) interrupt.

Josslyn and Dev keep arguing as Trina makes fun of all their constant fighting. Josslyn thanks Cameron for heling her move on after Oscar’s death.

At General Hospital (GH), Hamilton Finn (Michael Easton) and Hayden Barnes (Rebecca Budig) run into each other. Hayden wonders why he kept the fact that he had a brother a secret. Finn replies that she has kept plenty of secrets from him.

Lucy Coe (Lynn Herring) comes from around the corner and is wondering what Hayden is doing in town. Hayden says she wants to plant roots and needs help finding a place. Lucy sarcastically tells Finn that Hayden is considering making Port Charles her forever home.

At the Floating Rib, Valentin Cassadine (James Patrick Stuart) gets an update on Cassandra Pierce from Curtis Ashford (Donnell Turner). Curtis wonders what his connection to Cassandra really is and Valentin says he’s not paying him to investigate him and Nina.

Valentin sees Finn at GH and says he’s been trying to reach Anna, he needs to talk to her about Cassandra Pierce.

Sasha says she is okay with the trip being postponed and Michael apologizes. Michael says he has an important function to go to, his godson Wiley’s first birthday. Michael asks about Sasha’s hometown and she deflects when she sees Lucy Coe.

Lucy Coe says that in another life, Sasha could have been the face of “Deception.” Lucy thinks that Sasha could be a model.

Lulu Falconeri is distraught about the divorce

Lulu tries to hide as Maxie and Peter yell from behind the door. She opens the door and says she does not want to be around people right now, Dante gave her divorce papers. Maxie is surprised and says they should go out and get a drink instead of wallowing.

Lulu is distraught and Maxie keeps pushing her to get dressed so they can go out. Maxie offers up Peter as a babysitter for Rocco. Maxie and Lulu go to the Floating Rib and have margaritas, she runs into her previous date, Dustin.

Rocco is playing video games and tells Peter he has a book for them to read together.

Hayden meets up with Curtis and says she’s on an apology tour of sorts. Curtis tells Hayden that Finn wanted to find her and he’s curious where she has been this whole time. Hayden says she owes Finn an apology, but not sure if he will be receptive to it.

Rocco is hiding in the kitchen upset and Peter goes to console him. Peter explains that his mom was away from him growing up and he needs to know parents make mistakes.

Maxie brings Lulu home and she admits that she is just not ready to face the divorce. Curtis mentions the baby she lost and Hayden says she does not want to discuss it.

Carly says the divorce is awful, but at least Dante is going to get help. They discuss Dev and how he will fit into their family soon.

Josslyn goes to the footbridge and sees that her love lock they left at the bridge has been removed. She starts crying and Dev shows up to comfort her……flash to preview