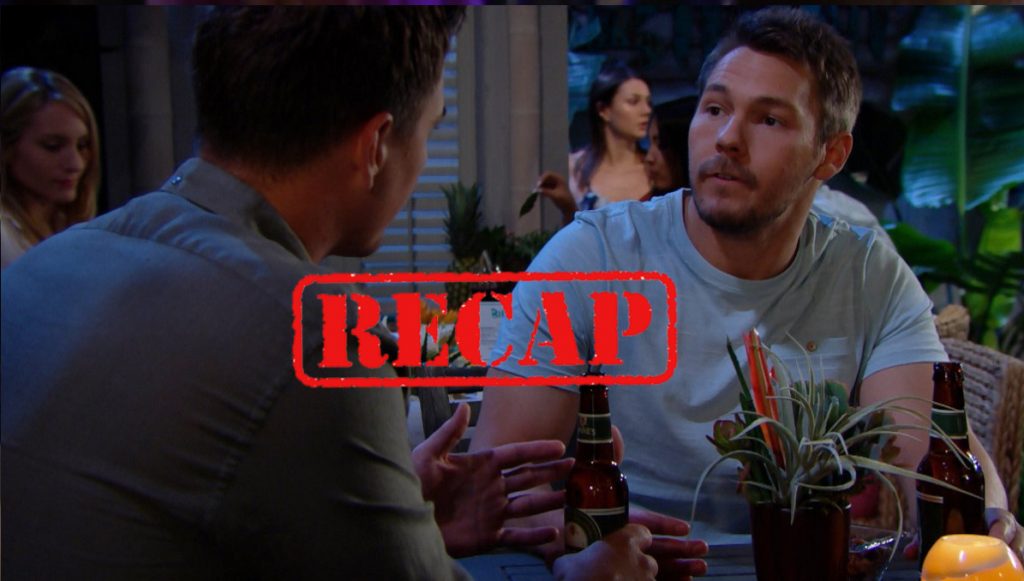 The Bold and the Beautiful recap for Tuesday, July 23 finds Wyatt Spencer (Darin Brooks) digging into Flo Fulton’s (Katrina Bowden) past after Liam Spencer (Scott Clifton) tells him about the argument he had with Thomas Forrester (Matthew Atkinson). Flo, meanwhile, receives a threatening text while Thomas continues to tell Douglas Forrester (Henry Joseph Samiri) to say all of the right things to Hope Logan (Annika Noelle). Also, Liam decides to reach out to Hope.

It begins at the Bikini Bar, where Liam meets Wyatt for drinks. Liam tells him that her overheard Thomas make some nasty threats towards Flo at the wedding. He says that their conversation had something to do with a secret, but he couldn’t make out what it was about. However, he has a feeling it has something to do with Hope. Wyatt wants to find out more details. Liam says that he heard Thomas make a threat towards Flo and that she called him a liar as well. Wyatt makes a comment about how he despises Thomas.

At the beach house, Flo gets a text. It’s from Thomas. He says that it was wrong for her to come to the wedding and that if she knows what’s best for her, she will keep quiet. Shauna Fulton (Denise Richards) arrives. She can feel that something is wrong with her daughter. Shauna says she hopes that Flo isn’t thinking about telling Hope the truth, with Flo protesting that this isn’t the life that she wants for her.

Shauna says to keep the past in the past and at this point, nothing can be undone. Later on, Wyatt appears and asks about the wedding. Flo tells him that she doesn’t like Thomas and has her reasons. Wyatt presses her to tell him the truth before she has a meltdown over it. Flo says that she needs to get the truth out one way or another.

Over at Brooke Logan’s (Katherine Kelly Lang) mansion, both Hope and Thomas are tucking in Douglas for the night. After Hope leaves the room, Thomas reminds the little boy of what he needs to say. Douglas tells Hope that he wants her to spend the night with her daddy.

#BoldandBeautiful Spoilers: Hope In Danger – How Far Will Thomas Go To Get Her Pregnant With His Baby @celebratesoaps https://t.co/o9yxBlU0ph

Thomas then tries to make his moves on Hope by stroking her hair and telling her how beautiful she looks before giving her a kiss on the lips. Hope leaves the room. A furious Thomas wants to know why they got married if she is refusing to fulfill her marital obligations by sleeping with him. Thomas then tells himself that he needs to keep Hope away from “idiots” like Flo and Liam.

Hope then takes a phone call from Liam and admits that she couldn’t sleep with Thomas. Liam says that he’s investigating what is going on and that Hope needs to hang on before he finds answers. After she hangs up the phone, Douglas calls out for his “mommy.”