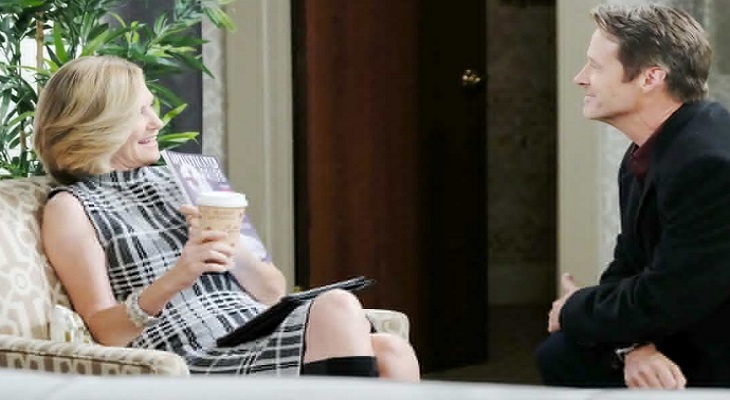 “Days of Our Lives” spoilers for Tuesday, January 22, tease that Sarah Horton (Linsey Godfrey) will pay the price for her hookup with Xander Cook (Paul Telfer). Eric Brady (Greg Vaughan) just found them in bed together, so he’ll be ready to unleash his wrath. He’ll be absolutely furious with Sarah for sleeping with the man he hates most.

Sarah will do her best to defend her hot night with Xander, but Eric will refuse to listen. He’ll think Sarah’s actions speak for themselves. “Days of Our Lives” spoilers say Eric will basically declare this friendship over. He just won’t think he can share a bond with someone who would do something so hurtful.

DOOL fans can’t forget that Xander played a role in Nicole Walker’s (Arianne Zucker) presumed death. She wouldn’t have been at that warehouse if it weren’t for him. Xander also shot Dr. Marlena Evans (Deidre Hall), so that’s another horrible offense. Eric’s mom could’ve died, so it’s easy to see why he’ll believe Sarah truly crossed the line.

Other “Days” spoilers say Eve Donovan (Kassie DePaiva) will nudge Jack Deveraux (Matthew Ashford) toward a new career. She’ll think Jack would make an excellent mayor, so she’ll do whatever she can to talk him into it. Eve will also stumble across Dr. Rolf’s (William Utay) diary on Tuesday, which should give her another advantage in Salem. She’s always looking for as much leverage as she can get!

Over with Kate Roberts (Lauren Koslow), “Days of Our Lives” spoilers say she’ll fill Jennifer Horton (Melissa Reeves) in on something important. It’ll involve Jack and it won’t be good news. Jennifer will have to deal with another reunion hurdle, so it’ll be interesting to see how she tackles this one.

Days of Our Lives Spoilers: Melinda Not Abe’s Only Competition for Mayor – Find Out Who https://t.co/MI02TfhvFg pic.twitter.com/4ovBaWvQra

Finally, Leo Starke (Greg Rikaart) will realize Xander played a dirty trick. He’ll figure out that Xander must’ve drugged him, so he won’t be happy about getting duped. Will Leo make Xander suffer the consequences or is Xander pretty much untouchable? Either way, there’s much more DOOL drama to come.

Tuesday’s episode will bring plenty of exciting scenes, so stay tuned. We’ll give you updates as other “Days” details and rumors emerge. Stick with the NBC soap and be sure to check SOS often for the latest “Days of Our Lives” spoilers, rumors, updates and news.