Jennifer Deveraux (Melissa Reeves) tries to get through to a desperate JJ Deveraux (Casey Moss) who is intent on finding Kristen DiMera (Stacy Haiduk) with revenge on his mind! Jennifer will try to convince JJ that revenge is not the answer, and that no amount of revenge will bring his late girlfriend Haley Chen (Thia Megia) back from the dead! Nevertheless, JJ will not back down, and will continue to accuse Kristen of Haley’s murder even if it was an accident!

Kate Roberts (Lauren Koslow) takes on a new career path as she waits tables at Brady’s Pub. Kayla Brady (Mary Beth Evans) will be shocked to see her there trying to take her order! But Kate has her reasons – and a secret behind them. True, being a waitress working possibly only for tips is dozens of steps down from the CEO positions that Kate has held in the past, but a girl’s gotta eat! It will be interesting to see what Kate tells Kayla when she asks questions! 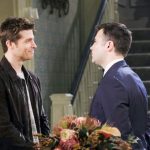 Lani Price (Sal Stowers) will finally reach out to her father, Mayor Abe Carver (James Reynolds) and tell him what is going on in her life. Lani has been in a convent in Rome, studying to become a nun. She will tell her father that she has made a commitment to someone – God! Abe may want to know if she has healed from her sudden breakup with Eli Grant (Lamon Archey), leaving him devastated at their wedding that wasn’t over a year ago, but she may not want to tell the real reasons and tell him it’s in the past and no longer important because she knows God has forgiven her.

Meanwhile, Eli finds himself headed for Rome; Gabi DiMera (Camila Banus) has sent him to Rome to thwart Chad DiMera (Billy Flynn) from his plans to force Gabi out of the CEO position at DiMera, and possibly divest even her company, Gabi Chic along with divesting Gabi herself! Of course, she does not yet know that “Big Daddy” Stefano DiMera (Stephen Nichols) is back and might take the company he founded back into his own power and control.

Abigail DiMera, (Kate Mansi) who has been doing deeper research into the night that her mother, Jennifer was pushed over the balcony railing of “The Bistro” on her wedding day, putting her into a one-year coma, tells Eve Donovan (Kassie DePaiva) she doesn’t think that Eve is guilty, even though Eve has been in prison for the crime. Abigail tells her that Jennifer doesn’t think Eve did it either, it just doesn’t feel right to her even though she can’t remember each and every detail of what happened.