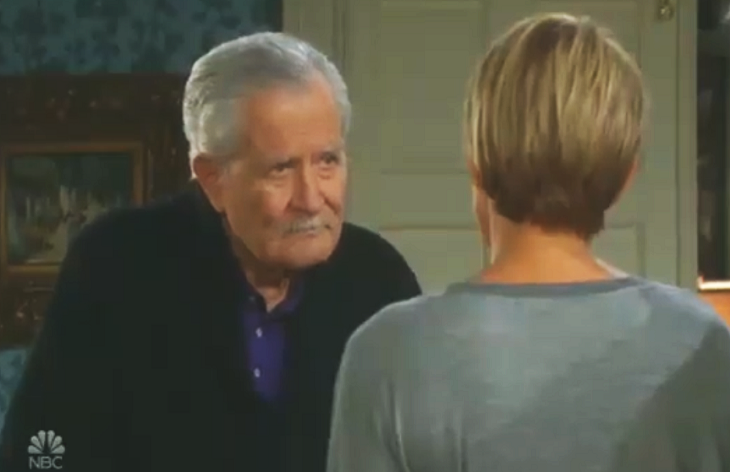 Days of Our Lives spoilers tease that Victor Kiriakis (John Aniston) will cause even more conflict between himself and his wife Maggie Kiriakis (Suzanne Rogers). He will blame Nicole Walker (Arianne Zucker) for her daughter Holly Jonas’ (Scarlett and Harlow Mallory) disappearance.

Maggie will be understandably upset, considering Nicole has just reappeared after being presumed dead for months. She has likely not had a chance to tell her whole story to anyone but Eric Brady (Greg Vaughan).

Victor really has no business blaming the tragedy on anyone. He probably assumes Nicole could have called someone way before now when she just showed up on Eric’s doorstep and going to his apartment first instead of looking for Holly.

Days Of Our Lives Spoilers – Nicole Walker Had No Idea

But what Victor may not realize is that Nicole looked for Eric first thinking he had Holly. She had no idea that Chloe Lane (Nadia Bjorlin) was taking care of her.

Nicole’s story to Eric was that she remembered being trapped in the wreckage of the warehouse, and then someone coming towards her but not remembering who. Then, after an indefinite period of time, she woke up in a hospital in an intensive care unit. She also mentioned having been burned badly and taking a long time to recover.

Nicole didn’t say how she got back to Salem, but as Days of Our Lives viewers know, she was very dehydrated according to Rex Brady (Kyle Lowder). She could have even walked or hitchhiked from Nashville (assuming that is where the hospital was) to Salem.

Victor, however, will still not give her an excuse, when he knows that every hospital has phones in the patients’ rooms, and at least she could have had a nurse call for her. So as far as Victor is concerned, it is Nicole’s own fault for not returning and taking care of her daughter herself once she was able.

That won’t go over well with Maggie at all and she will take Nicole’s side! She will feel it’s not Nicole’s fault if she was so badly injured she couldn’t reach out to anyone when she was healing from burns. And Maggie probably knows a little more about hospitals and healing processes than Victor thinks he does!

Days Of Our Lives Spoilers: Stefan Caught As He Tries To Sneak Gabi Out Of The Mansion https://t.co/0Nl7jvatNS pic.twitter.com/nhwQqtFCX7

Nicole didn’t immediately go looking for Holly because it was late, and she figured Holly was asleep. And as Days of Our Lives viewers know, she didn’t want to frighten her daughter because she could think Nicole was a ghost.