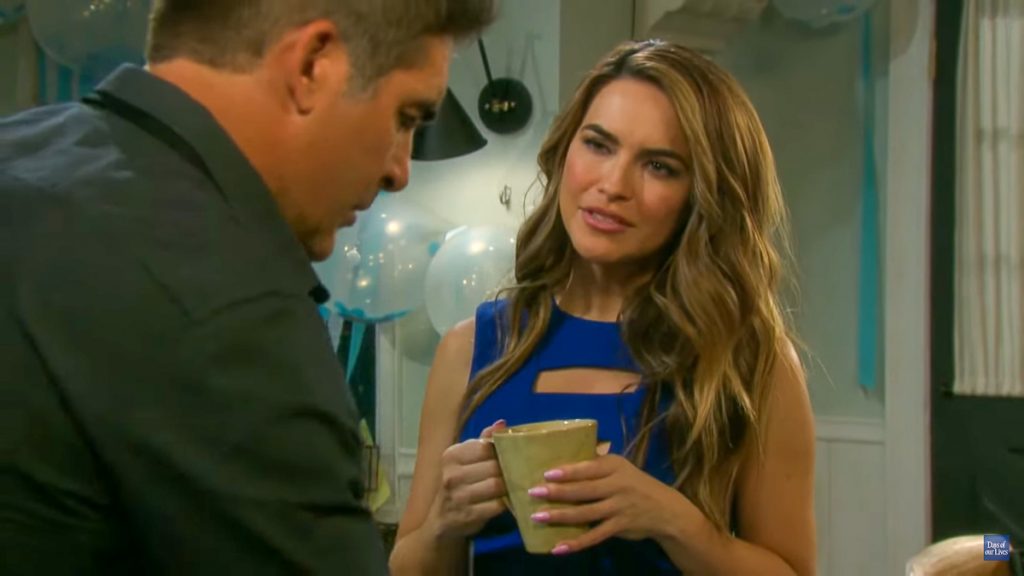 Jack Deveraux (Matthew Ashford) and Jennifer Horton (Melissa Reeves) have a romantic evening at the Salem Inn as they plan their much too often interrupted happily ever after. With no visible obstacles to their happiness, they reminisce about their past and talk about their future, oblivious to what is happening to their son in another part of Salem or what the future may hold for Jennifer in just a few more days! Can their happiness last “happily ever after”, or will it be destroyed again?

At Salem University Hospital, where Rafe Hernandez (Galen Gering) has been rushed after ingesting the poison cupcake that Jordan Ridgeway (Chrishell Hartley) intended for Ciara Brady (Victoria Konefal), he becomes suspicious of Jordan when his blood tests come back and he realizes that he has been poisoned! There was something odd about how she suddenly did that 180 on letting Ben Weston (Robert Scott Wilson) have anything to do with his nephew David Ridgeway (Jaxton and Dexter Ellis)! He shares his suspicions with JJ Deveraux (Casey Moss) who leaves to go investigate.

After JJ leaves Salem University Hospital, he finds Jordan, but she takes him by surprise and attacks him! JJ is injured, and Jordan then goes on the run! Ben and Ciara’s suspicions were absolutely correct, Jordan was in no way ready to be released from Bayview; she is possibly more dangerous than Ben ever was! Jordan is much better at being sneaky and fooling people than Ben!

John Black (Drake Hogestyn) and Marlena Evans (Deidre Hall) confront a very bizarrely acting “Hope Brady” (Kristian Alfonso) which of course puts John right where Princess Gina (Kristian Alfonso) wants him, although she considers Marlena an unwanted appendage! Long time Days of Our Lives viewers will recall that the real Gina was in love with John, back years ago when he was “The Pawn” and then became depressed when he found Marlena and couldn’t paint or do much of anything else Stefano DiMera (Joseph Mascolo) wanted her to do; at that point he kidnapped Hope and put a control chip in her brain which was controlled by his watch, via satellite. That’s why Dr. Wilhelm Rolf (William Rolf) caught himself pressing his watch in a recent episode and then thought better of it! However, Hope as Princess Gina received Gina’s feelings for John too and it will be the same this time! Hope still wavers between the Gina persona and her own, but John may be able to pick up on who Hope’s bizarre behavior reminds him of!

Jack and Jennifer will have a tense run-in with Rolf, likely still trying to get his flash drive from Jennifer. Jennifer had planned to take it to work, to see if the Salem Spectator IT department could crack the password and access it so she truly may not have it this time if she has already turned it over to them. However, Rolf is obsessive about his “work” and that flash drive, so he will not give up until he has it back in his possession!