Days Of Our Lives Spoilers: Tripp And Ciara Set A Trap For Claire — Can They Prove Ben’s Innocence? 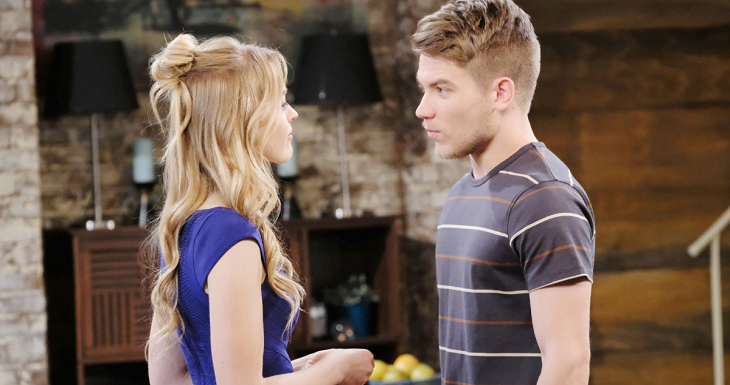 Days of Our Lives spoilers for Thursday, June 27 tease that Tripp Dalton (Lucas Adams) and Ciara Brady (Victoria Konefal) will set a trap for Claire Brady (Olivia Rose Keegan) to get her to confess to setting both the fires that Ciara was trapped in and that Tripp was trapped in along with Haley Chen (Thia Megia) at the Horton Cabin, and record her confession. This week’s Days of Our Lives promo shows their bait will work!

The plan will be for Claire to come into the loft and spot Tripp and Claire making out on the couch, scantily clad under a blanket like they had been making love.

The promo shows Claire’s insane jealousy and her spiraling into a dangerous rage as she spots them! However, this plan to trap her is not just to clear Ciara’s boyfriend, Ben Weston (Robert Scott Wilson) of the arson and attempted murder charges for which Eve Deveraux (Kassie DePaiva) with Claire herself’s help has framed him; Ciara can plainly see that Claire has needed mental health treatment for quite some time, and the only way to force her to get it would be to prove that Claire is a danger to herself or to others! Ciara, as a close relative could pursue judicial commitment papers, but she has to have that proof.

Days of Our Lives Spoilers, Thursday, June 27: Ciara And Tripp Have A Plan For Claire–Gabi And Stefan Can’t Deny Their Feelings

Days Of Our Lives Spoilers– Will Eve Get Claire Help?

Even Eve can tell that Claire is unstable, and she, as Police Commissioner could probably get her at least on a 48-hour psych hold at Bayview; but she needs her to make her frame of Ben work. As Days Of Our Lives viewers know, she wants to make him pay for his murder of her daughter Paige Larson (True O’Brien) which he did commit, as the Necktie Killer, but skated on prison charges because of his mental illness, therefore having pled guilty by reason of insanity. As far as Eve is concerned, a trip to Bayview doesn’t count for justice, and certainly not for revenge!

Other Days of Our Lives spoilers tease that Tripp and Ciara’s plan will backfire horribly, and the promo shows Ben discussing the plan with Dr. Marlena Evans (Deidre Hall) who tells him it’s a bad plan!