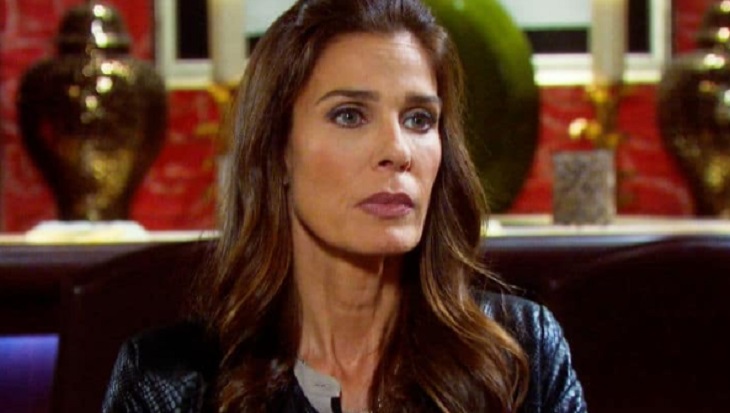 Days of Our Lives Spoilers – Hope Brady Broke Off Ted Laurent’s And Her Relationship, But That Doesn’t Mean She Wanted Him Dead!

Hope broke off Ted’s and her relationship after she found she couldn’t trust him, but that doesn’t mean she wanted him dead, and she certainly doesn’t want his killer to get off scot-free!

However, that means that the correct killer has to be found, and obviously she must have been convinced by Stefan DiMera (Brandon Barash) that he wasn’t the real killer, even though he was found at the scene of the crime.

Hope told newly appointed Police Commissioner Eli Grant (Lamon Archey) that she was suspicious of Ted’s statement about the kidnapping because it didn’t add up. She told him what Will Horton (Chandler Massey) had said also, that he looked up surveillance video in the area where Ted had told in his statement that Xander Kiriakis (Paul Telfer) had kidnapped him from and neither man was to be seen during the timeframe that Ted had stated.

She also told Eli about the rolls of money she found in Ted’s home, and that she had returned the diamond necklace to Ted. However, she had seen a woman in a hood throwing something away in a garbage can in Horton Square; she had also found a one hundred dollar bill the woman had dropped and tried to get her attention, but the woman slipped away.

Of course, Days of Our Lives viewers know that was Kristen DiMera (Stacy Haiduk) after stashing Ted’s body in his apartment, and she needed to get rid of the necklace! Hope started to search the garbage when she received the call from Eli to come to the station so he could tell her about Ted’s murder in person, and she returned to the garbage can and found the diamond necklace in it so of course, she is suspicious about the mysterious woman in the hood!

Days of Our Lives Spoilers – Hope Brady Is A Civilian, However —

Hope is doing police work as a civilian, however, and if Eli had not known her he would have considered her a suspect; after all, it could be construed that she had a motive, means and opportunity to kill Ted!

It would be in Hope’s best interests, therefore, to have someone helping her that may not be in the police force, but is recognized as a help to law enforcement and has the license and experience for private investigative work, so she goes to John Black (Drake Hogestyn) for his help to solve Ted’s murder and to locate the true killer!

Other Days of Our Lives spoilers tease that Ben Weston (Robert Scott Wilson) and Ciara Brady (Victoria Konefal) are looking for evidence implicating “Nicole” Walker DiMera (Adrienne Zucker) in Ted and Kate DiMera’s (Lauren Koslow) kidnapping) for Stefan, to find the truth so their paths are bound to intertwine and with all of them investigating, “the truth will out” as the old saying goes!