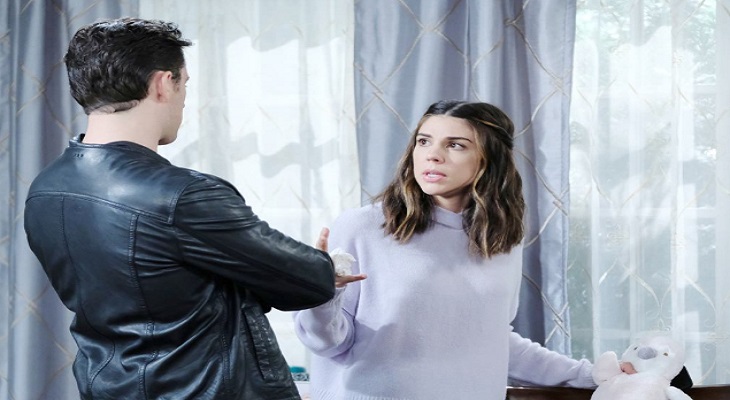 “Days of Our Lives” spoilers for Thursday, February 7, tease that Abigail Deveraux (Kate Mansi) will freak when she realizes Charlotte DiMera is missing. Jordan Ridgeway (Chrishell Hartley) just went upstairs to steal the baby, but Abigail will remain clueless about her involvement. She’d never suspect that caring, seemingly sane Jordan would do such a thing.

Of course, DOOL fans have seen a very different side of Jordan. She’s almost as batty as her brother used to be, so she’s willing to go to extremes. Since Jordan believes Ben Weston’s (Robert Scott Wilson) potential victims have to be protected, she’s taking drastic action. Jordan recently kidnapped Ciara Brady (Victoria Konefal) and now it’s Charlotte’s turn to be abducted.

Days of Our Lives – Abigail Panics Over Missing Charlotte

“Days of Our Lives” spoilers say Abigail will get in touch with Chad DiMera (Billy Flynn) immediately. She’ll also bring the Salem PD into this, but they won’t have a lot to go on. Chad and Abigail will obviously contemplate Ben as a possible baby swiper. Between Ben’s history and Jordan’s fears, “Chabby” will certainly think it seems reasonable.

However, Stefan DiMera (Tyler Christopher) will also land on Chad and Abby’s suspect list. He thought Charlotte was his daughter not too long ago. Stefan bonded with the baby and happens to be the kind of guy who retaliates.

All of that will add up to proof of guilt for Chad, so he’ll confront Stefan on Thursday. “Days of Our Lives” spoilers say they’ll have a heated confrontation as Chad seeks the truth. He’ll push Stefan to reveal where he put Charlotte, but he won’t get any answers. That’s because Stefan doesn’t have them! He’ll assure Chad that he has nothing to do with this and would never cause any harm to Charlotte.

Other “Days” spoilers state that Chloe Lane (Nadia Bjorlin) will have a big decision to make. Will she move in with Stefan or with Brady Black (Eric Martsolf)? Both offers will be on the table in Thursday’s episode, but Chloe will ultimately make the DiMera mansion her home. She’ll agree to move in with the kids and let Stefan keep them safe from Mateo aka El Fideo’s (Andoni Gracia) vengeful posse.

Days of Our Lives Spoilers – Eric Gets His Heart Broke

Finally, Sarah Horton (Linsey Godfrey) will hope to make up with Eric Brady (Greg Vaughan). Things are still tense between them, but Sarah will think they can move past this. Sadly, Eric’s discovery could cause another setback. He found Rex Brady (Kyle Lowder) and Sarah’s clothes on the floor of his apartment, so he’ll naturally be jealous and hurt.

It sounds like some gripping scenes are on the way. We’ll give you updates as other “Days” news and rumors emerge. Stick with DOOL and don’t forget to check Soap Opera Spy often for the latest “Days of Our Lives” spoilers, rumors, updates and news.