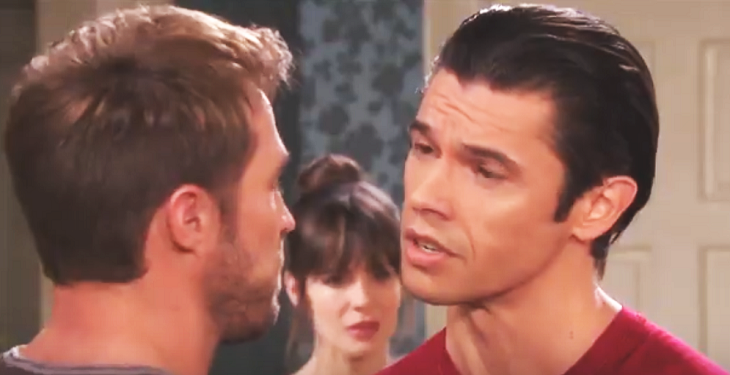 Days of Our Lives spoilers tease that Xander Kiriakis (Paul Telfer) and Rex Brady (Kyle Lowder) will get into a serious fight over Rex’s new bride, Sarah Horton Brady (Linsey Godfrey) this week.

The Days Of Our Lives weekly preview “Don’t Even Blink” shows Rex tearing into Xander, probably knocking him to the floor, as a stunned Sarah looks on in the background. Eric Brady (Greg Vaughan) is also present and witnesses the melee. Rex threatens to kill Xander, shouting at him “I’m going to end you!” What exactly could Xander have done or said concerning Sarah that Rex apparently either saw or heard about?

Perhaps Kristen DiMera (Stacy Haiduk), as Nicole Walker (Adrienne Zucker) could have decided to retaliate against Xander by telling tales about him to Rex. She knows Rex is married to Sarah, and Xander is sweet on Sarah. She could have even said something as Susan Banks (Stacy Haiduk) before getting her mask back from Xander. And this is the first time that Rex has seen Xander, since he’s been busy dealing with Kristen.

Days Of Our Lives Spoilers – Xander Cook Had His Briefcase Stolen

He also had his briefcase stolen by Gabi Hernandez, (Camila Banus) after being hit in the family jewels, but he recovered quickly and got his briefcase back when Gabi couldn’t break into it and couldn’t get her brother Rafe Hernandez (Galen Gering) to help her. 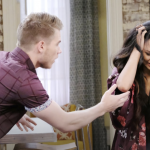 Rex’s mother, Kate DiMera (Lauren Koslow) could have made some insinuations about Xander’s behavior around Sarah as well. She hates Xander enough to cause trouble for him, and knows that he’s involved with Kristen. Although she, as well as Ted Laurent (Gilles Marini), implicated Stefan DiMera (Brandon Barash) in their kidnappings and captivity. On the other hand, maybe Xander has done nothing and an innocent action was misinterpreted by Rex!

Rex, as Days of Our Lives viewers well know, has had a history of being a player. When he and Sarah were engaged the first time, and they lived in Chicago, Illinois and worked at the same hospital there, he cheated on Sarah not only with Mimi Lockhart (Farah Fath), producing a child with her, Emily Lockhart (Natalie and Katie Monarch) but also with Sarah’s half-sister Noelle Curtis (Samantha Barrows) during the same time period!

Many men with a history of being players go on to be married men with jealousy issues. Sometimes They transfer their own tendencies for infidelity to their wives. They then kill  their marriages at the root from the inside out. While it doesn’t seem Rex is distrustful of Sarah, he is definitely distrustful of Xander.

He also knows Xander and Sarah had a fling when she was drunk and was upset over Rex. This might be all it would take to set him off. Maybe he will witness an innocent action, like Xander  taking Sarah’s hand to help her up off the couch.

Sarah may indeed need a little help, having been mistakenly conked in the back of the head by Kate earlier. Eric had been nearby at that time to tend to her wounds, but she may still be recovering from her injury and perhaps Eric is not in the room when Rex sees Xander just trying to help, but comes back in hearing the altercation! Rex may go to the worst case scenario, and take Xander’s kind gesture as sexual innuendo towards Sarah!