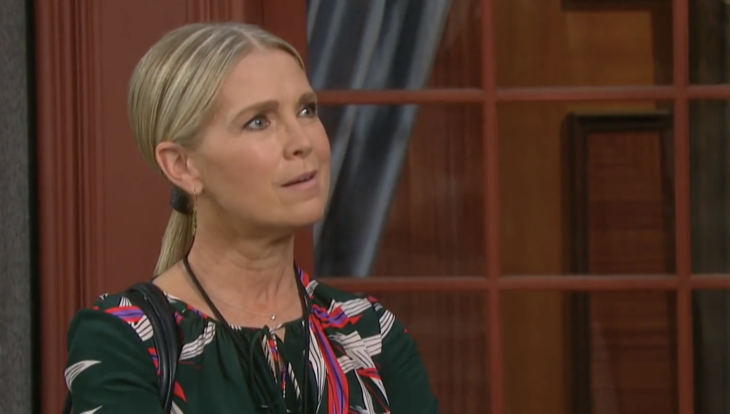 Jack wants to speak to Jennifer alone and tries to convince her he knows what he is doing. Jennifer tells Jack that it isn’t the truth. Jennifer promises to expose them both as con artists. Eve tells Jack not to let Jennifer get to him. Eve is determined to get justice for her daughter and put Ben away. Eve’s first order of business is to bring Haley to justice.

Days Of Our Lives Spoilers – Hope Hernandez Is Fired

Jack summons Hope to the station, where Eve asks for Hope’s gun and badge. Eve tells Hope she is the new commissioner. Hope is shocked and says it is nepotism, Eli doesn’t agree with the decision either. Hope hands over her gun and badge. Eli apologizes to Hope, she’s sorry he has to work with Eve. Hope tells Eli the town is going to need him.

Eli tells Lani that Hope is out as commissioner, Lani says Jack offered Rafe the job. Eli tells Lani it isn’t good who is taking over. Eve asks Eli about the tip on J.J. and Haley. Eli tells Eve that Tripp was there instead, and they didn’t have probable cause to bring him in for questioning. Eve tells Eli they are going to do things her way; his number one priority is to find Haley and J.J.

Days of Our Lives Hope Brady (Kristian Alfonso) and Eli Grant (Lamon Archey) go to the motel thinking they were going to catch Haley Dalton (Thia Megia) and J.J. Deveraux (Casey Moss) but find Tripp Dalton (Lucas Adams) instead. Tripp says he was trying to find Haley to talk her into turning herself in, Hope threatens him with the jail. Hope warns Tripp that ICE doesn’t play games and all three of them could end up behind bars. She speaks to Jennifer and tells her the inmates are running the show now. Hope tells Jennifer she believes J.J. and Haley had been at a motel outside of town.

Days Of Our Lives Spoilers – Lani Price’s Plan Is Stopped

Ciara tells Rafe he needs help with the baby and begs him to give Ben a chance to see him. Rafe promises to talk to Jordan Ridgeway (Chrishell Hartley) about the baby. She wants to take pictures of the baby for Ben. Rafe is upset that Lani didn’t come to him about Ciara’s request. He is furious that Eve is the commissioner. Rafe and Lani are tempted to walk; he says they can’t because they have to keep the piece.

Days of Our Lives J.J. and Haley make it to Smith Island; she likes the cabin but questions if J.J. wants to give up his life to go on the run with her. J.J. explains to Haley that he wants to get away from his dad and tells her how great Canada is. Haley is hungry, all J.J. can find is canned beans and franks. Haley says the beans and franks aren’t bad. J.J. tells Haley about some of Jack and Jennifer’s adventures. J.J. has plans to get fake passports for himself and Haley.

Days Of Our Lives Spoilers – Claire Brady Refuses To Help

Haley cannot believe the J.J. used to be a drug dealer. J.J. and Haley start to kiss, and Tripp interrupts with a phone call. Tripp tells J.J. that Hope has been fired. J.J. is furious that Jack fired Hope. Haley wishes the cabin was a romantic escape for them instead of a hideout. J.J tells Haley it won’t be this way for long. J.J. promises to take care of Haley.

Days of Our Lives Ben comes in to pick up Ciara’s phone charger and asks Claire Brady (Olivia Rose Keegan) if she’s going to burn them. Ben doesn’t blame Claire for wanting to throw Tripp’s stuff out. Ben tells Claire he didn’t leave the lighter there, but he is the number one suspect again. He asks to see the lighter, Claire refuses to let him. She claims to have thrown the lighter out. Claire asks Ben why he is there; he says to get a phone charger.

Ben smells chemicals and says it’s lucky for Tripp that she got rid of the lighter. Claire does Tripp’s laundry to make up for what she did to Haley. Tripp tells Claire he doesn’t want to look at her. Tripp threatens to get a second job to afford his own apartment. Claire plans to try to prove she is worthy of Tripp’s love. Tripp wants her not to get her hopes up and takes his laundry upstairs.

Days of Our Lives Ciara shows Ben the photos of the baby she took today. Ciara also tells Ben that Rafe agreed to talk to Jordan. Ben tells Ciara about the run-in with Claire, he’s suspects Claire was going to burn Tripp’s clothes.

Young And The Restless Recap & Spoilers Wednesday, May 22: Sharon And Rey Move In Together – Billy Filled With Rage