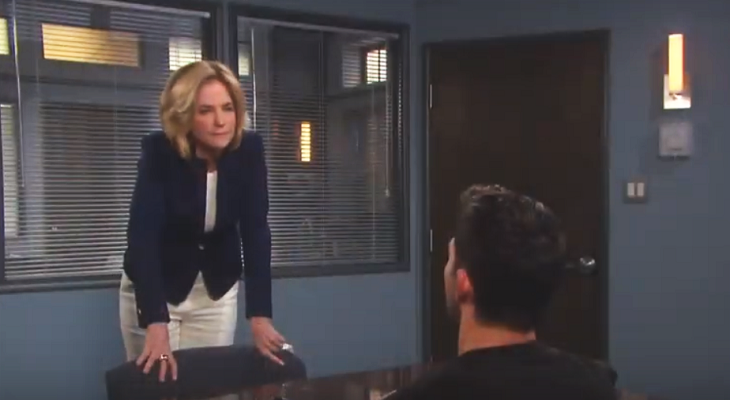 Days of Our Lives spoilers tease that Eve Deveraux (Kassie DePaiva), in her new powerful position as Police Commissioner, will set out to frame Ben Weston (Robert Scott Wilson) for arson. This has to do with the cabin fire with Ciara Brady (Victoria Konefal) inside.

Days of Our Lives viewers know the fire was actually set by Claire Brady (Olivia Rose Keegan). She did it out of insane jealousy over Tripp Dalton (Lucas Adams)!

But, as viewers know from Ben and Eve’s past with each other, she has a reason to seek vengeance on Ben. When he was the Necktie Killer he never served real time when he killed her daughter, Paige Larson (True O’Brien).

Days Of Our Lives Spoilers – Can’t Go Back In Time

Eve can’t go back in time and have him tried for that crime again. This is because of the law restricting a perpetrator from being tried twice for the same crime.

The most she could do would be to try to sue him in civil court. But getting money out of him (of which he has none, she’d be trying to get blood out of a turnip) wouldn’t really make up for the loss of her daughter at his hands.

So, Eve, with her newfound power of the office of Police Commissioner, will go through the files and possibly plant evidence. She will reopen the investigation into the fire that trapped Ciara when she had a broken leg.

Days Of Our Lives Spoilers – Ciara Brady Carried To Safety

Viewers remember that Ben carried her to safety. This was after going to the drugstore to get the meds that he needed to keep from going off the rails again.

But in the meantime, Ben and Ciara will be doing some investigating of their own on that fire which will lead them to Claire. She has been in cahoots with Eve.

But as other Days of Our Lives spoilers tease, Eve may not be so willing to protect Claire any more. Claire will lash out at Eve over Tripp’s rejection of her recently and his breaking up with her!

Days of Our Lives #DOOL Spoilers: Xander And Nicole Have Something To Celebrate @celebratesoaps https://t.co/4cbCuNJDp9