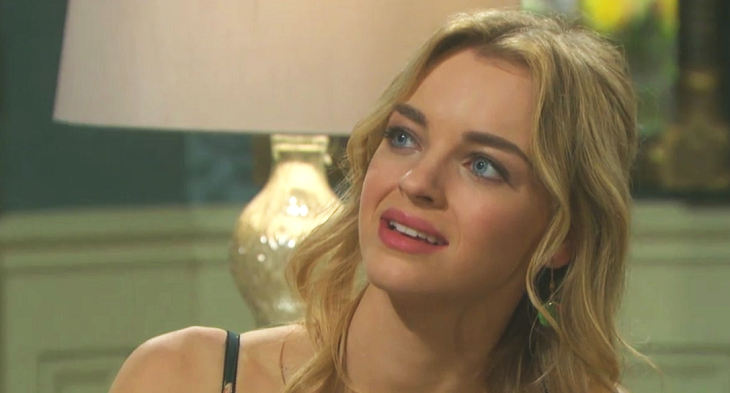 Days of Our Lives spoilers tease that Claire Brady (Olivia Rose Keegan) will blame Eve Deveraux (Kassie DePaiva) and lash out at her for Tripp Dalton’s (Lucas Adams) breaking up with her.

“Claire Bear” is clearly not thinking straight or reasoning correctly and operating straight out of paranoia and cray-cray land when she lashes out at Eve.

The way that Claire is likely thinking, is that Tripp found out about the second tape directly from Eve. In reality, he found out from JJ Deveraux (Casey Moss) who was with Haley Chen (Thia Megia) when Eve used the second tape to blackmail her into getting herself deported.

Days Of Our Lives Spoilers – Thinking Out Of Rage

Claire already knew about the first tape. Tripp also knew because they were together when Melinda Trask (Laura Kai Chen) divulged that she’d broken into Jack and Eve’s room and destroyed it. 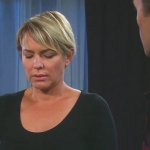 Claire is thinking purely out of rage and confusion and not thinking Eve wouldn’t tell Tripp that Claire made the tape. She feels betrayed by Eve. In a way it could be taken as a second-hand betrayal, but that was not Eve’s intention. Eve was only trying to get Hayley deported without getting Tripp in trouble too, as Claire had requested.

Eve will explain, or at least try to, depending on how off the rails Claire is when she lashes out. She may not be able to get a word in edgewise and Claire is likely to be hysterical!

Days Of Our Lives Spoilers – Tripp Dalton’s Own Decision

Claire may not realize that Eve is now the police commissioner. Eve could be forced to put her under a 48 hour psych hold at Bayview if she doesn’t settle down. Or Eve might just let her finish venting and then explain what she did. She will then tell her Tripp must have found out from Hayley or JJ.

The outcome may be the same as if she had, but it was Tripp’s own decision. His actions and his coming to the conclusion that Claire made the tape to begin with and was in cahoots with Eve was what caused the breakup. Eve was not trying to break them up either intentionally or unintentionally.

Bold And The Beautiful Spoilers: Steffy Gets Shocking News When She Returns

Coronation Street Spoilers: Are Shona And David Splitting Up?