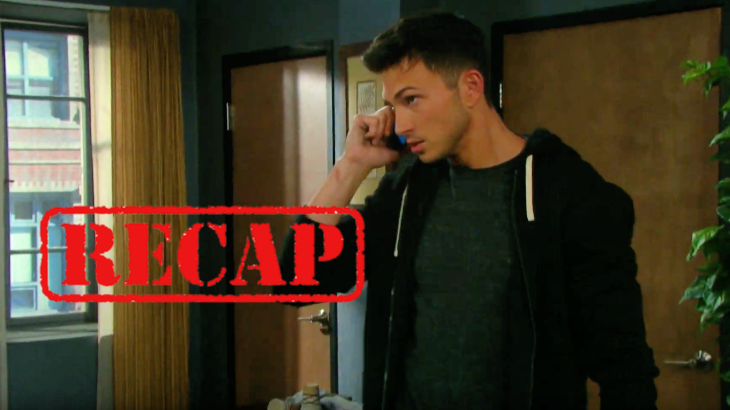 Days of Our Lives (DOOL) recap for Friday, February 15, 2019, reveals a distraught Jordan (Chrishell Stause) is on the bench outside the pub. Jordan says Ben (Robert Scott Wilson) can’t be dead.

Jordan says she had to do a lot of things to try to get Ben put away. Rex sees a scar on Jordan’s head; she tells him she was in a bad accident last year. Kayla (Mary Beth Evans) calls Rex and tells him Kate (Lauren Koslow) is in the hospital. Rex tells Jordan he has to go, his mom is in the hospital. Jordan is shocked that Kate has survived. Jordan says this is just like Kate, messing things up for her again. Jordan asks why Kate can’t just die.

Days Of Our Lives Spoilers Ciara Goes To The Hospital

Days of Our Lives’ Ben and Ciara (Victoria Konefal) are getting ready to walk to town when Hope (Kristian Alfonso) runs up and pulls a gun on Ben. Ciara steps in front of Ben and tells Hope not to shoot him. Hope doesn’t believe the Jordan kidnapped Ciara; she gives her details of her ordeal. Hope tells Ciara that Jordan returned Charlotte (Matilda Hanna and Chloe Teperman) to Abby (Kate Mansi) and Kayla is going to check on her. Hope doesn’t understand why Jordan would do this to Ciara and Charlotte. Ciara tells Hope that Jordan wanted to frame Ben. Hope apologizes to Ben.

Love is in the air for Chad and Abigail as they get ready to get married one more time. Watch Days of our Lives, weekdays on @NBC. pic.twitter.com/XlibR90G8D

Ben says he isn’t sure he would have believed him either, Ciara is safe, that’s all that matters. Ciara says thanks to you and hugs him. Ciara wants to know how Ted (Gilles Marini) got mixed up in all of this. Hope says Ted was there when everything went down. Ciara starts to cough, and Hope wants to get her to the hospital. Ben picks Ciara up and says he isn’t taking any chances and carries her off. Hope is with Ciara in her hospital room and tells her she wants them to be close again.

Ben comes to check on Ciara and tells Hope he understands if she needs to press charges. Hope goes to the station leaving Ben and Ciara and promising to talk later. Ben tells Ciara the whole time she was missing all he could think about was that stupid fight. Ciara came home because she wants them to be together. Ciara tells Ben they have a lot to work out, Ben asks if Ciara is sure. Ben tells Ciara she has no idea what this means to him and they kiss. Kayla wants to keep Ciara overnight.

Ciara tells Kayla that Ben saved her and Kayla thanks him. Outside, Hope wants to go to the station to check on things, and Ted encourages her to stay at the hospital. Ted tells Hope she is amazing and kisses her. Hope tells Ted never to do that again. Rafe (Galin Gering) walks up and calls to Hope. Ben tells Ciara he is the reason that Jordan is messed up and she wouldn’t be here if it weren’t for him. Ben blames himself for what happened to Ciara. Ciara says Ben is good for her. Ben says he is a lucky guy and kisses Ciara. Jordan walks up and hits Ben in the head.

Days of Our Lives’ Rex has tried to make a cake but has burned it. Eric (Greg Vaughan) asks what Rex set the oven on to cook it. Rex tried to bake it on broil. Eric tells Rex that Sarah (Linsey Godfrey) likes blueberry pie, Rex asks Eric to set up the table for dinner and runs out to get it. Sarah arrives at Eric’s for dinner. Eric meets her at the door with flowers from Rex. Sarah asks Eric why Rex isn’t there; he says a dessert emergency. Eric tells Sarah that Rex asked him to keep her company if that is ok.

Sarah is glad they are alone, she wanted to ask Eric something anyway. Eric tells Sarah he thinks Rex has learned his lesson hurting her. Eric tells Sarah a story about donuts when he declared his love for Jennifer. Sarah thinks Eric is joking; he says he’s serious. Eric tells Sarah he cares about Jennifer, but they are better off as friends. Sarah hopes that when Eric is ready, he will let another woman into his heart. Sarah says she isn’t just nice, he’s a wonderful guy and would hate to see him go through life alone. Rex calls Sarah and tells her about Kate. Sarah offers to meet him at the hospital or wait for him. Rex tells Sarah to have dinner with Eric; he might be a while.

In the latest #DAYS, it's Valentine's Day in Salem and everyone is feeling the love!https://t.co/ZsCmioRrzb pic.twitter.com/9wHeTBJeBU

Days Of Our Lives Abby Wants Her Family Back

Days of Our Lives’ Abby tells Chad (Billy Flynn) she doesn’t know how to thank him. Ben tells Abby he doesn’t have to thank him for saving his daughter. Chad tells Abby that Jordan kidnapped Ciara too, Abby is shocked. Kayla checks on Charlotte and tells Abby she will be fine. Kayla leaves promising to call with test results. Chad needs to make a call, but Abby stops him, she has something to tell him first. Abby thanks Chad again, he tells her he will do everything he can for her and his kids no matter what happens.

Days of Our Lives’ Kayla tells Rafe Kate did overdose, but it wasn’t the drug from the bottle he gave her. Rafe asks if Kate could have taken more than one. Rafe offers to stay with Kate when Kayla gets a call to check on Charlotte. Rafe asks since when Kate let drugs kick her ass, she replies never. Kate asks Rafe how she got there. Rafe tells Kate he found her on the floor with a bottle of pills. Kate tells Rafe that Jordan drugged her, Rafe has to stop her before she hurts someone else.

Rafe wants to know why Jordan would do that, and Kate tells him that she figured out that Jordan kidnapped Abby’s baby. Rafe finds out that Jordan also kidnapped Ciara and Charlotte. Kayla comes in and checks on Kate. Kate and Rafe tell Kayla what happened. Kayla tells Kate that Rafe is the one who got her there on time. Rafe tells Kate he needs to find Ciara and Hope. Kate asks how Rafe knew she was in trouble; he says when Gabi told him she was drunk in the square it didn’t ring true. Rex rushes in to check on Kate, and she introduces him and Rafe. Rex wants to know what happened; Kate says she ran into the wrong person at the wrong time. Jordan sneaks into the hospital in scrubs but manages to avoid Rafe.