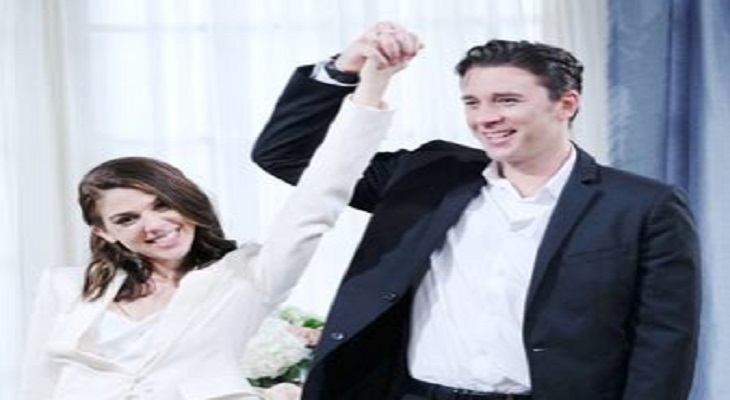 “Days of Our Lives” spoilers for Monday, February 18, tease that Jordan Ridgeway (Chrishell Hartley) will try to stop Ben Weston (Robert Scott Wilson) once and for all. She doesn’t realize she’s the real threat now. Jordan knocked Ben out, so she’ll move toward him with a syringe as she describes her plot to Ciara Brady (Victoria Konefal). Jordan will insist that she has to prevent more of Ben’s destruction.

Naturally, Ciara will refuse to let Jordan murder Ben. She’ll jump out of bed and try to get the syringe away from Jordan. As Jordan fights back, Ciara will quickly land in grave danger. Jordan will be willing to take them both out if the has to. She’s determined to put an end to Ben’s reign of terror, so she’ll really spiral out of control.

Days of Our Lives – Chabby Makes Big Plans For The Future

“Days of Our Lives” spoilers say Ciara will catch a lucky break when Ben wakes up. He’ll prevent Jordan from killing Ciara, so this “Cin” love story will continue. Speaking of continuing love stories, Chad DiMera (Billy Flynn) and Abigail Deveraux (Kate Mansi) will move theirs forward. They just decided to reunite, so they’ll make love and set some big plans for the future.

DOOL viewers can expect Chad to make a shocking suggestion soon. He’ll believe their family could use a new beginning, so he’ll believe they should move to Paris. Chad will talk about a job offer he’s received as he makes his pitch. He’ll manage to sell Abigail on the idea as well as another one. Chad and Abigail will tie the knot again later this week, so “Chabby” fans will want to stay tuned.

Other “Days of Our Lives” spoilers say Ted Laurent (Gilles Marini) will get a stern warning. Rafe Hernandez (Galen Gering) will decide to make things crystal clear to his latest rival. He can tell Ted has gotten too close to Hope Hernandez (Kristian Alfonso), so he’ll tell Ted to back off. Rafe loves Hope and wants to protect their marriage. As a result, he’ll do whatever he can to push Ted out of the picture.

Days of Our Lives – Sarah Horton Fears The Worst

Over with Sarah Horton (Linsey Godfrey), she’ll worry that Rex Brady (Kyle Lowder) has betrayed her again. “Days” spoilers state that something will rev up her cheating suspicions, so she’ll certainly fear the worst. Rex hasn’t exactly proven he knows how to be faithful!

It looks like a fantastic episode’s coming up. We’ll give you updates as other “Days” news and rumors emerge. Stick with DOOL and don’t forget to check Soap Opera Spy often for the latest “Days of Our Lives” spoilers, rumors, updates and news.

Love is in the air for Chad and Abigail as they get ready to get married one more time. Watch Days of our Lives, weekdays on @NBC. pic.twitter.com/XlibR90G8D