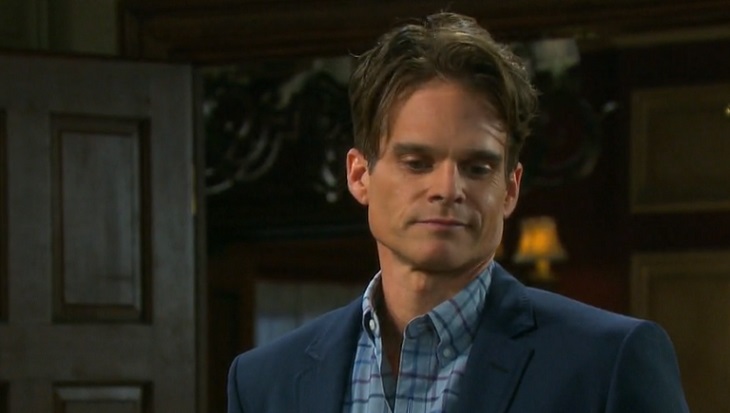 “Days of Our Lives” spoilers for Monday, March 25, tease that Diana Cooper (Judith Chapman) will get rattled by John Black (Drake Hogestyn). He just caught her trying to steal the incriminating IV bag, so she’ll have to think fast. Diana will hope she can come up with some excuse and find a way out of this mess. However, John may point out that Diana’s fingerprints will serve as all the proof he needs.

Later, Leo Starke (Greg Rikaart) will arrive and wonder what’s going on. Once he’s brought up to speed, “Days of Our Lives” spoilers say Leo will face a crushing blow. Diana will admit that she deceived Leo about his paternity. John isn’t his biological father, so Leo will be thrown for a loop. He thought he finally had a decent dad, so Diana’s lie will leave him fuming.

“Days” spoilers say Leo will lash out at Diana for constantly ruining everything. He’ll launch a physical attack, but John will be there to pull Leo off her. It sounds like a major confrontation’s coming up! Meanwhile, Brady Black (Eric Martsolf) will interrupt Stefan DiMera’s (Brandon Barash) warm moment with Chloe Lane (Nadia Bjorlin). He’ll seethe when he sees just how close she and Stefan have become.

Brady will make it crystal clear he doesn’t approve, especially when he speaks with Chloe privately. He’ll do whatever he can to make Chloe see Stefan’s true colors, but she sees the softer side of the devious DiMera. Brady will have to work harder if he wants to get Stefan out of Chloe’s life.

Other “Days of Our Lives” spoilers state that Rafe Hernandez (Galen Gering) will tackle a problem. He’s fed up with Ted Laurent (Gilles Marini) and the threat to his marriage. Rafe loves Hope Hernandez (Kristian Alfonso) and has no intention of letting Ted blow things up.

Of course, Ted can be awfully sneaky. Rafe can’t rest until he takes Ted down and hopefully pushes him out of the picture. He’ll mull over a strategy in Monday’s DOOL episode, so Ted had better watch his back!

It looks like some great scenes are ahead on the NBC soap. We’ll give you updates as other “Days” news and rumors emerge. Stick with DOOL and don’t forget to check Soap Opera Spy often for the latest “Days of Our Lives” spoilers, rumors, updates and news.