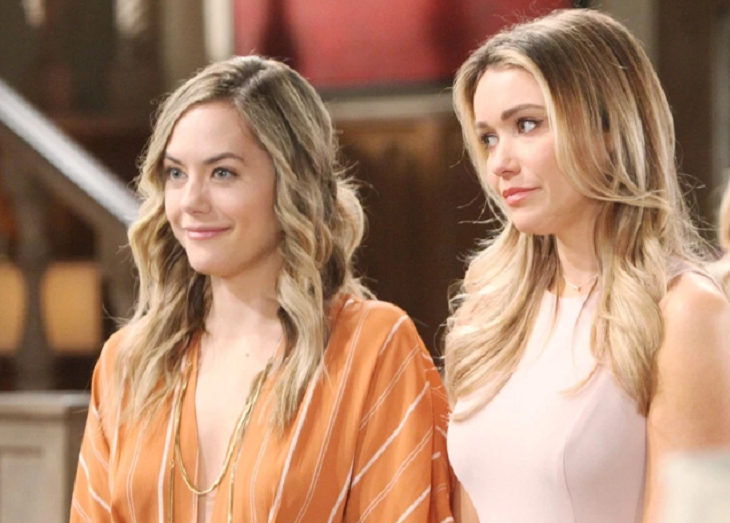 The Bold and the Beautiful (B&B) spoilers tease that Flo Fulton-Logan (Katrina Bowden) has a choice to make. She can choose to remain silent or tell the truth to at least one interested party. The end of Lope is the latest event that should force Flo’s hand.

Having participated in the Beth Spencer (Madeline Valdez and River Davidson) baby swap scheme was wrong. Nothing can make that right and it can’t be explained away as a simple mistake.

B&B Spoilers– Flo Is Not A Victim Anymore!

Flo’s willful go-along with Reese Buckingham’s (Wayne Brady) horrid gambling debt repayment plot means that she served as an accomplice to multiple criminal acts. The only way to halt what’s happened is to come clean, as soon as possible. Choosing to withhold the truth indefinitely can only further misery and increase the time Flo will serve in jail.

Clearly, as this is a soap, the reveal will happen. So why not have Flo be the one to drop it?

The way she reacted when Wyatt Spencer (Darin Brooks) learned about his brother, Liam Spencer (Scott Clifton), and Hope Spencer (Annika Noelle) ending their marriage reaffirmed that Flo still has a conscience. In fact, it led all those who know about Phoebe Forrester actually being Beth until recently.

Now that Xander Avant (Adain Bradley) pulled the facts out of his revived girlfriend, Zoe Buckingham (Kiara Barnes), he tops all others as wanting Lope to know that their child never died. With however Zoe tries to convince him not to come forward, Xander has the greatest impetus to do so.

Today on #BoldandBeautiful, Zoe begins to feel uneasy as she realizes that Xander knows all about Flo and Beth and he might not have any trouble revealing the secret to the Logan family or the authorities. pic.twitter.com/OGnRecXyJZ

In contrast, Reese is hiding out in London, England. He returned there with the intent of never telling Hope and Liam what he did. Reese rightfully calculated that his presence wouldn’t be wise.

Zoe’s in a conflicted situation. She has been traumatized ever since learning what her father did. But she doesn’t want his life to be upended. So Zoe continues to implore Flo to remain silent.

Flo’s mother, Shauna Fulton (Denise Richards), seems to not care about Lope and their child. She’s purely interested in her daughter’s new life. That realized lottery win has also resulted in Shauna gaining full access to the Forrester mansion, where she and Flo are living. Connected non-concern for what the truth might do to her longtime best friend, Quinn Forrester (Rena Sofer), is also on full display.

Flo better hope (pun not intended) that Xander doesn’t unburden himself before she does. If that happens, her super plush Logan family lifestyle will end faster than the latest rag trade trend that’s seen on Forrester Creations’ runways from Los Angeles, California, to Paris, France.