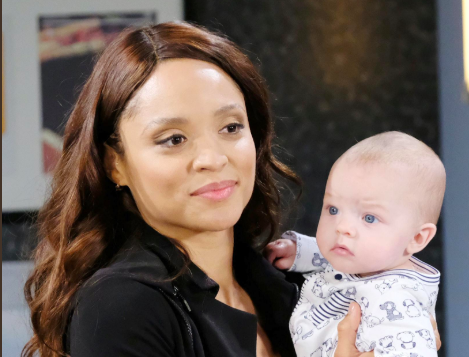 Days of Our Lives (DOOL) spoilers tease that Lani Price (Sal Stowers) will find herself in a strange position. She’ll need to take some important steps toward getting on with her life after separating from baby David Ridgeway (Dexter and Jaxton Ellis). As DOOL viewers know, Lani suddenly realized that she had gotten too close to David, who is actually Jordan Ridgeway’s (Chrishell Hartley) little boy.

DOOL Spoilers: Lani Price Will Find Herself In A Strange Position

After Eli Grant (Lamon Archey) broke off his relationship with Lani, Lani approached Rafe Hernandez (Galen Gering) and kissed him, declaring Rafe, David, and herself as a “family.” But after Rafe rejected her advances, Lani realized that she was totally living in a fantasy world about David and her relationship to him.

After her moment of clarity about her relationship with David, Lani broke down in Rafe’s arms. She realized that she had been using David as a substitute for her own little boy who she lost last year. And according to DOOL spoilers, she will soon start to put her life back together.

Lani will likely decide to go back to work as a police detective – something that she gave up when she took a leave of absence to care for David. That will be an important step toward rebuilding her life, but there will also be another part of her life that will need some repair, and that’s her relationship with Eli.

Days Of Our Lives Spoilers: Eli Grant And Lani Price Aren’t Currently In A Relationship

Of course, Lani and Eli currently don’t have a relationship, since Eli broke things off with her. But DOOL spoilers say that Lani will soon reach out to Eli and try to make things right. As DOOL viewers know, Lani never stopped loving Eli, but she did seriously push him away in favor of David. That hurt Eli a great deal, ad Lani will need to make a big apology.

In the latest #DAYS, Ciara and Tripp are determined more than ever to prove Claire is the culprit.https://t.co/ZsCmioRrzb pic.twitter.com/QdwwKjp0ji

Expect some heartfelt scenes between Lani and Eli, as she lets him know that she misses him and that she’s terribly sorry for pushing him out of her life. The good news is that it looks like Eli will be understanding and take Lani back. He knows what was at the root of Lani’s behavior…grief over losing her own baby. He’ll have sympathy for her and forgive her.

So it seems that DOOL viewers can expect an “Elani” reunion and a fun summer romance between these two. Plus, the summer DOOL previews say that there will be more than one engagement over the next couple of months. Could “Elani” be one of them?