Days of Our Lives spoilers tease that Ted Laurent (Gilles Marini) might have some rather questionable dealings behind the scenes that have never been brought to light on Days of Our Lives!

On the April 18 episode, Days of Our Lives viewers saw Ted take a phone call that got him really riled up. He lost his cool and told whoever was on the other end that he thought he told him or her never to call him at that phone number. He happened to be in the Salem Police Department at the time, so who knows who might walk in on him and overhear something he wouldn’t want them to?

Days of Our Lives spoilers for Monday, April 22 tease that Kate Howard DiMera (Lauren Koslow) will overhear Ted on the phone talking about Chloe Lane (Nadia Bjorlin). As Days of Our Lives viewers know, Chloe has been in danger from the cartel since some of El Fideo’s (Andoni Gracia) men came to avenge him a couple of months ago at Doug’s Place, and Stefan DiMera (Tyler Christopher) killed one of them. 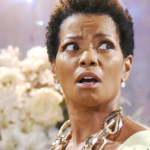 They came back to finish the job on the April 18 episode, one looking for her at the DiMera mansion and the other at Doug’s Place. She barely missed being killed yet again when Brady Black (Eric Martsolf) busted into Doug’s Place just in time to help Eli Grant (Lamon Archey) kill the thug.

It seems quite a coincidence that Ted is overheard talking about Chloe not long after yet another hit on her was foiled! Could Ted secretly be a member of the cartel?

Days of Our Lives viewers may have noticed a slight change in Ted’s accent when he was angry at the person on the phone; it seemed to have more of a Latino flavor to it than a French one, or was it just our imagination? Maybe Ted isn’t even Ted – maybe he’s really someone else.

Days Of Our Lives Spoilers – Who Was Ted Laurent Talking To?

Several episodes ago, Diana Colville Cooper (Judith Chapman) obviously knew Ted from quite a while ago, so he may have been playing this game for several years. Of course it is possible that Ted changed his identity even while continuing to do business with the cartel under an alias with them as well!

While it’s too early to know if Ted’s phone call on Thursday is the same one Kate overhears on Monday, it’s certainly a possibility, given how long it can take one day to play out in Soapland!