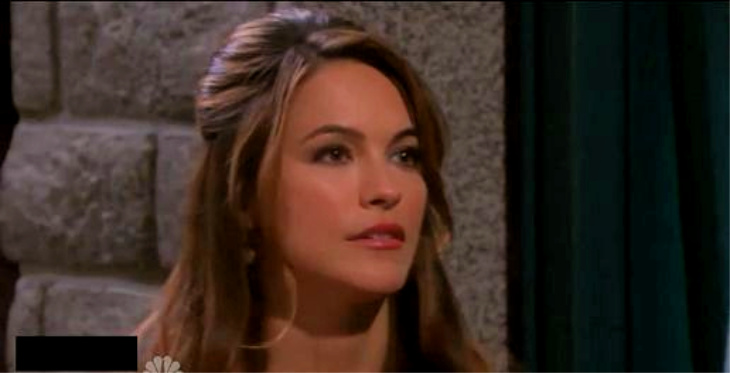 Days of Our Lives (DOOL) spoilers tease that Jordan Ridgeway (Chrishell Hartley) will soon be back on the canvas. Jordan is Ben Weston’s (Robert Scott Wilson) sister, and she’ll be making her Days comeback in a very big way.

Back when Jordan was in Salem from 2013-2015, she was a calm person who worked as a physical therapist to help Rafe Hernandez (Galen Gering) during his rehabilitation after being attacked, and eventually, she began a relationship with Rafe. She also had a brief relationship with Chad DiMera (Billy Flynn), but ultimately left Salem for a job offer in New York City.

But when Jordan returns to Salem, she’ll be back with a very different demeanor. It seems that in the intervening years, Jordan will have experienced some sort of breakdown, and she’ll return to Salem with a specific goal in mind…to protect some Salem residents from her brother Ben, whom she believes is still dangerous.

But the way that she goes about “protecting” Salem from Ben will reveal just how unhinged Jordan has become. According to Days spoilers, Jordan will seek to protect who she perceives to be Ben’s “targets” by kidnapping them!

Jordan will first abduct Ciara Brady (Victoria Konefal), apparently as Ciara’s on her way home from visiting Theo Carver (Kyler Pettis) in South Africa. In Jordan’s warped mind, she’ll see her actions as helpful and as a way to protect Ciara from Ben.

After Jordan kidnaps Ciara, she’ll make her way into Salem and run into Abigail (Kate Mansi). The two will chat about Ben, and Abigail will admit to Jordan that she’s afraid of Ben and that it’s scary knowing that Ben is free and walking the streets of Salem.

From there, Jordan will surmise that baby Charlotte DiMera is in danger, and she’ll be the person who kidnaps Charlotte. Of course, Chad will incorrectly assume that Ben is the culprit, and then he’ll go after Stefan DiMera (Tyler Christopher) as a possible kidnapper as well. It seems that no one will suspect Jordan of the crime, nor Ciara’s kidnapping.

So, it seems that a snapped Jordan will be behind the upcoming Salem kidnappings. Since she’ll likely be the furthest suspect from people’s minds. it might take a while for the Salem PD to put two and two together and figure out that she’s behind both kidnappings.

Of course, once Ben finds out that his sister is back in town, he might be able to notice that she’s acting strangely. Could Ben be the person who will ultimately solve the mystery of the kidnappings?

General Hospital Spoilers: Kevin Fights Back, Feeds Ryan A Lie So He Will Get Caught