General Hospital Spoilers: Kevin Fights Back, Feeds Ryan A Lie So He Will Get Caught 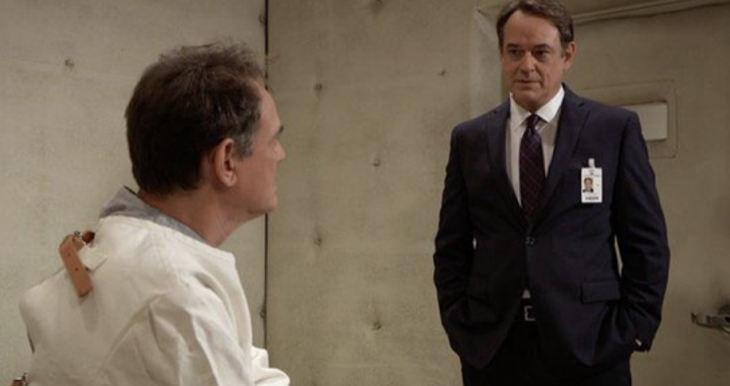 General Hospital spoilers tease that Laura Collins (Genie Francis) may be the one who ultimately exposes “Dr. Kevin Collins” (Jon Lindstrom) as his twin, Ryan Chamberlain! In January 30th’s GH episode, after Ryan mentions the divorce is nearly final, Kevin brings up a prenup implying there is a lot of money Ryan could get his hands on.

He manages to say it in such a way that Ryan might think Kevin let it slip. Kevin hopes that Ryan, wanting the money, will take the bait and confront Laura about the prenup – which of course, there is no prenup! Let’s hope that if he does, Laura will take the hint and realize Kevin is the not-so-dead Ryan, and stall him on the prenup money!

Laura will probably be stunned and possibly in disbelief that this could be Ryan, but who else could it be? She knows there was no prenup, so why is Kevin demanding it? Even if he is psychotic and thinks he’s Ryan he wouldn’t ask for prenup money that doesn’t exist!

The police should already have looked at her daughter Lulu Falconeri’s (Emme Rylan) work computer to see if there was any information pointing to the attacker, but Ryan did have time to erase the search history, at least outwardly before she came to and he went down with the blindness virus attack.

But there are ways to retrieve a computer’s search history if one knows how to do it. Then they would find that the last thing she looked at was Ryan Chamberlain’s victims, and if Laura is in the loop, she will remember that she saw his list with nine victims on it whereas the internet only had a record of seven! Stay tuned to GH and check General Hospital spoilers frequently to see if Ryan takes the bait and Laura takes the hint!

Bold and The Beautiful Spoilers: Flo and Zoe Engage In An Epic Standoff