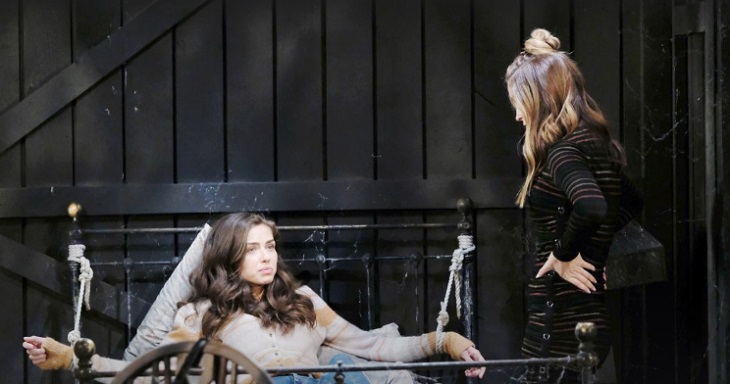 “Days of Our Lives” spoilers for Tuesday, February 5, tease that Ciara Brady (Victoria Konefal) will have a shocking realization. She was confused when Jordan Ridgeway (Chrishell Hartley) showed up at the cabin, but her expression quickly turned to one of relief. Ciara believes Jordan can free her and help her get back home where she belongs.

Jordan certainly could do that if she were sane, but she won’t and she isn’t! It turns out Jordan has escaped from Bayview. She’s on a mission to protect people like Ciara from Ben’s violent tendencies. Jordan just can’t believe Ben is capable of change, so she’s resorted to drastic measures to keep Ciara out of his orbit.

“Days of Our Lives” spoilers say Ciara won’t understand at first. She’ll urge Jordan to untie her and aid with her getaway, but crazy Jordan won’t be willing to pitch in. After Jordan takes off without helping, Ciara will realize she’s in big trouble. She’ll wonder how on earth she’s going to get out of this mess.

DOOL viewers can also expect Hope Hernandez’s (Kristian Alfonso) search efforts to rev up. She’ll be desperate to find her missing daughter, but she won’t know if she should buy Ben’s story. He claims he had nothing to do with Ciara’s kidnapping, but it’s not like Hope trusts him at all. Still, Hope may decide to consider a few other possibilities and hopefully find some new leads.

Other “Days of Our Lives” spoilers say Chad DiMera (Billy Flynn) and Kate Roberts (Lauren Koslow) will get some stunning news. They’ll find out Stefan DiMera (Tyler Christopher) was shot by a thug who came after Chloe Lane (Nadia Bjorlin). Kate and Chad may not be thrilled that Stefan survived, but they’ll at least be glad he was there to save Chloe.

You can bet Chloe will be overjoyed about that as well! She’ll tell Stefan just how thankful she is and grow closer to him as she tends to his wound. Across town, Abigail Deveraux (Kate Mansi) will get some advice from Julie Williams (Susan Seaforth Hayes). They’ll talk about what Chad’s done wrong as well as what he’s done right. “Days” fans know Chad made mistakes, but he loves Abigail with all his heart.

Julie will think it’s time for Abigail to forgive Chad and get their romance back on track. Abigail won’t be willing to take that step yet, but some shockers will change her mind soon enough! We’ll give you updates as other “Days” details and rumors emerge. Stick with DOOL and don’t forget to check Soap Opera Spy often for the latest “Days of Our Lives” spoilers, rumors, updates and news.