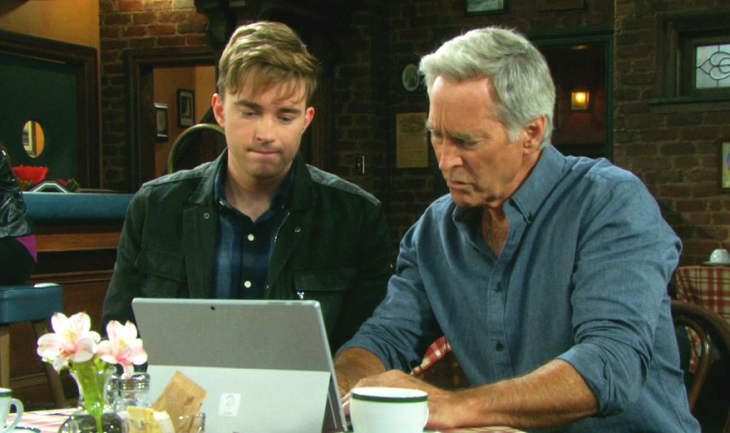 Days of Our Lives (DOOL) spoilers tease that Will Horton’s (Chandler Massey) situation will start to get desperate. As DOOL viewers know, Will’s got a brain tumor. Fortunately, the tumor is benign, but it’s still causing problems for Will. He needs radiation to treat the tumor, which is an ordeal in itself, but he also has been having angry outbursts as a result of the tumor’s placement in his brain.

And as it turns out, Will doesn’t just have an ordinary tumor. According to Kayla Johnson (Mary Beth Evans), the tumor will almost certainly be a side effect of Dr. Wilhelm Rolf’s (William Utay) treatments. DOOL viewers will remember that Dr. Rolf brought Will back from the dead after he was killed by Ben Weston (Robert Scott Wilson) a few years ago.

And later, Will injected himself with one of Dr. Rolf’s serums to try to get his memory back. It worked, and Will did regain his memory, but it appears that the serum may have resulted in Will’s now-problematic brain tumor. That’s bad news for Will, but there may be a silver lining.

Days Of Our Lives Spoilers – Research Key To Treating Tumor

Hey #DOOL fans,
Do you think that Nicole is a fake? Read more about this right here ⬇️⬇️⬇️⬇️https://t.co/oOWs8SqzOE

Of course, DOOL viewers know that Dr. Rolf is indeed alive, as he was present at the DiMera warehouse in Nashville last year. Sami Brady (Alison Sweeney) ran into Dr. Rolf as she was rescuing EJ DiMera (James Scott) from the warehouse. But actually tracking the man down at this point might be impossible.

But what might not be so impossible is tracking down the notes from Dr. Rolf’s research. Will once had possession of Dr. Rolf’s diary, complete with pages written in invisible ink. But the diary ended up changing hands several times, going from Will to the hospital administrator to Eve Deveraux (Kassie DePaiva) to Xander Cook (Paul Telfer).

Of course, Will has no way of knowing that Xander now has possession of Dr. Rolf’s diary. But he and Sonny Kiriakis (Freddie Smith) will soon realize that they need to locate the diary if there’s any hope of successfully treating Will’s tumor.

Days Of Our Lives Spoilers – Putting His Detective Skills To Use

And that’s where John Black (Drake Hogestyn) will come in. According to Days of Our Lives spoilers, John will soon embark on a mission to track down Dr. Rolf’s diary, in the hopes of saving Will. He’ll see just how upset Marlena Evans (Deidre Hall) is about her grandson and offer to help out by putting his keen detective skills to use.

Now that Xander is back in town, hopefully John will quickly trace the diary to him. But as DOOL viewers know, Xander isn’t the most cooperative guy, so he probably won’t be willing to just hand over the diary just because John asks. Plus, Xander might not even have the diary at this point. He could have handed it back over to Dr. Rolf for all we know.

Days of Our Lives Spoilers Thursday, May 16: Jack’s Big Victory – Hope Gets Fired – Haley And JJ Are On The Run

At any rate, look for John to get busy tracking down the diary, as the race is on to save Will. It looks like Will’s condition will start to get worse, as DOOL spoilers say that he’ll lash out uncontrollably again, this time at Marlena. Do you think John will be able to get his hands on the diary?

Young And The Restless Spoilers: Victor Wants Adam To Reclaim His Life – Others Feel Threatened By His Return