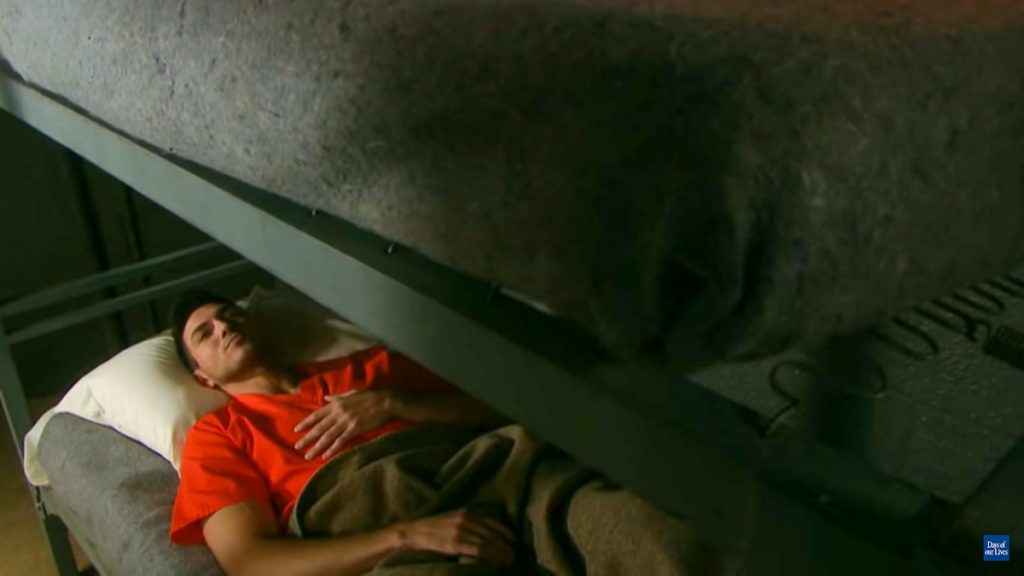 Days of Our Lives (DOOL) spoilers tease that everything is different after the one year time gap. For instance, Ben Weston (Robert Scott Wilson) is in jail for murdering his sister, Jordan Ridgeway (Chrishell Hartley) but viewers know that Ben know that Ben is innocent, as he is the one who discovered her body. But about Ciara Brady (Victoria Konefal), has she given up on Ben, or is she up to something else?

Before Jordan was murdered, Ben had gone to Victor Kiriakis (John Aniston) for help. Jordan was unhinged, and had targeted Ciara and Ben blamed for her murder. Victor agreed that Jordan was a threat, but cautioned that he may have to kill Jordan. Ben didn’t want that, he wanted Victor to have Jordan taken away somewhere for treatment. But Victor also has no use for Ben, since been used to be a serial killer himself. At one point, Victor even tried to get Xander Cook (Paul Tefler) to murder Ben. When Xander couldn’t go through with it, Victor tried to strangle Ben himself, but was stopped.

So now that Jordan is dead, was it Victor who had her killed? Ciara Brady seems to have given up on Ben after the time jump. But is that really the case. Ben hadn’t told Ciara about Victor trying to kill her, but perhaps he finally let her in on it during the missing year. Ciara is working for Victor now at Titan. But is Ciara really moving on with her life without Ben, or is she trying to find evidence that Victor had Jordan killed?

Days of Our Lives Spoilers – Ben Weston is in prison

Ben is now in prison and has no way to prove his innocence himself. Perhaps Ciara has taken it upon herself to prove Ben didn’t kill his sister. If she earns Victor’s trust, perhaps he will let something slip that can help Ben finally get out of jail. But getting Victor to confide in her may be tricky, so this may take Ciara a lot of time and hard work.

Did Victor have Jordan killed? Has Ciara really given up on Ben, or is she just trying to get the goods on Victor. Anything is possible in Salem, so be sure to tune in to Days of Our Lives weekdays on NBC! And don’t forget to check back right here regularly for all your Days of Our Lives news, information and spoilers!

*Taylor HH*Please post no later than Wed by end of day. Thank you

Days of Our Lives Spoilers – Will Eve Donovan Ever Get a Happy Ending? Bitter, Vengeful Spirit Rooted in Pain

Days of Our Lives spoilers suggest that Eve Donovan (Kassie DePaiva) always ends up bitter and unhappy. Fans have to wonder if she will ever get a happy ending. Plus, a discussion on what causes the character to be so vengeful.

When one thinks of Eve Donovan, images of love don’t come to mind. However, that is exactly what she has always craved. Even though she has been married a few times, none of those were healthy relationships. In fact, some were simply business deals or manipulation tactics.

It’s difficult to give genuine love when one has never received it. This seems to be the case for the misguided Salemite. This is evident by how she acts when she first gets involved in a romance. She stops at nothing to give them the world.

Either they mistreat or use her, or she ends up feeling cheated, even if it’s not an intentional betrayal. Something always happens that flips a switch inside her mind. She can go from total devotion to utter hatred in the blink of an eye.

Days of Our Lives spoilers suggest that one of Eve’s most painful moments was her daughter’s murder. Paige Larson (True O’Brien) was killed by Ben Weston (Robert Scott Wilson) aka the Necktie Killer. Even though he has since been redeemed, she has never forgiven him. In fact, years later, Eve still wants to make Ben pay for taking away the only good thing in her life.

It seems that in nearly every storyline, Eve has ended up feeling enormous pain. Sometimes her feeling that is understandable. Other times, it is just anger at having her happiness ripped away again — even if she deserved it.

One example is the two times she married Jack Deveraux (Matthew Ashford). The first was so she could get the proceeds from his book.

The second time she wed Jack, he had amnesia. She used that to her advantage. Now, she may have truly had feelings for the man. However, the relationship was based on lies, secrets and manipulation. Then, when Jack realizes the truth and wanted a divorce, she tried to get payback.

Days of Our Lives Spoilers – Will Eve Donovan Ever Get a Happy Ending?

DOOL spoilers suggest that at some point, Eve will find happiness. However, she needs to do a lot of work on herself first. She needs to think about her decisions and how they affect other people. She should want to see other people happy instead of spreading misery. She needs to look at herself with total transparency and recognize what motivates her. She needs to know why everything in her life ends badly.

Once she learns that, then she can make some positive changes for herself and the rest of Salem.