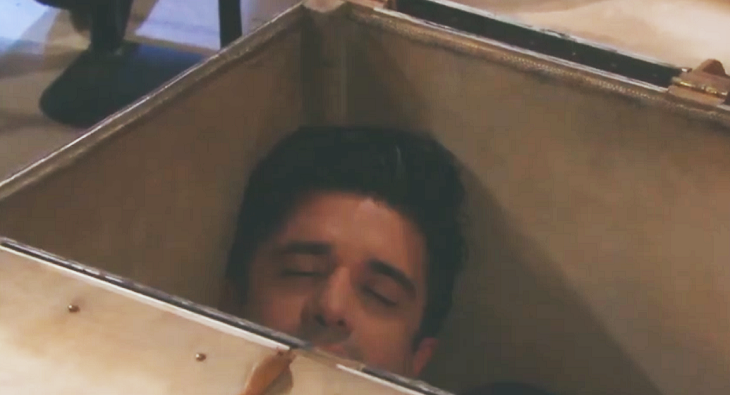 Days of Our Lives spoilers for Monday, August 5 finds that Ted Laurent (Gilles Marini) will be making the worst mistake of his life when he decides to confront Kristen DiMera (Stacy Haiduk). Also, Kristen is caught trying to get rid of incriminating evidence while Brady Black (Eric Martsolf) gives into Nicole Walker’s (Arianne Zucker) advances, not knowing that she is actually Kristen DiMera. Here’s what you need to know.

It begins with Ted deciding to take matters into his own hands and facing off with Kristen. Unfortunately, it’s the last time that he will ever do so.

Things get pretty dramatic when Kristen realized that he’s snooping a little too much into her business and decides to shoot him in the head. It’s the last that we will see of Ted Laurent, as his portrayer, Gilles Marini is exiting from the hit NBC soap.

That’s not the only surprise that’s in store for Monday’s episode. Now that she is the new Mrs. DiMera, Gabi Hernandez (Camila Banus) is playing hard ball as well. But before that happens, her husband Stefan DiMera (Brandon Barash) finds Ted’s dead body.

Needless to say, Kristen will find a way to pin the blame on Stefan in order to cover up her dirty dead. However, Gabi is not going to let things slide that easily as she has a bombshell of her own. She finally has an opportunity to play dirty and she’s going to take full advantage of it.

Also, after Sarah Horton (Linsey Godfrey) let the wrong name slip while in bed with her husband Rex Brady (Kyle Lowder), he’s now going to make a run for it. Days of Our Lives spoilers tease that Rex is going to pull the plug on their marriage and skip out of Salem after realizing that his wife is still in love with his brother, Eric Brady (Greg Vaughan).

This, of course, is despite the fact that Rex has his own history of cheating on Sarah and sleeping with her sister behind her back. However, Rex decides to let it be known that he doesn’t appreciate Eric getting too close to his wife as he goes off on him.

Elsewhere, Jack Deveraux (Matthew Ashford) announces that there is a new police commissioner in town now that he’s kicked his wife Eve Donovan (Kassie de Paiva) to the curb. Kristen will try to get rid of her evidence before she gets caught.

Brady Black, meanwhile, will give in to Nicole’s advances, despite his hesitation at first. Little does he know that it’s actually Kristen DiMera who is trying to seduce him. Of course, fans will have to tune in to find out what will happen next!

Keep watching Days Of Our Lives to find out what happens next!