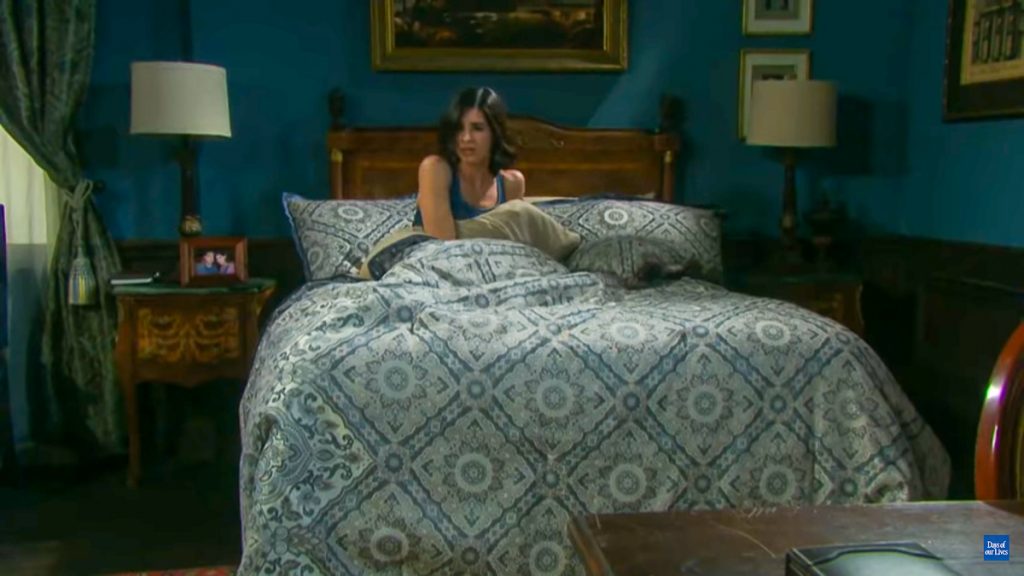 Days of Our Lives (DOOL) spoilers tease that Gabi DiMera (Camila Banus) will make a big demand. She’s been particularly harsh lately with Lani Price (Sal Stowers), since Lani is the person who shot and killed Stefan DiMera (Brandon Barash). Of course, Lani was just defending herself from Vivian Alamain (Robin Strasser) and certainly didn’t intend to shoot Stefan, but that’s pretty difficult for Gabi to understand right now. She’s deep in grief over Stefan’s death and the pain is absolutely overwhelming for her.

As DOOL viewers know, Gabi has lashed out at several people since Stefan’s shooting, but no one has been the target of her rage as much as Lani has been. Gabi just can’t get beyond the fact that Lani is the person who pulled the trigger on the gun that killed Stefan. In her mind, If Lani had just made a different decision or handled the situation with Vivian differently, then Stefan would still be alive.

Of course, it doesn’t help that Lani has completely escaped punishment, at least in Gabi’s mind. Internal affairs ruled her shooting justified and clean, and she won’t be facing any charges in connection with Stefan’s death. Plus, Gabi is outraged that Eli Grant (Lamon Archey) and Lani are happily planning their wedding so shortly after Stefan has died at Lani’s hand. Gabi feels that Lani should be suffering for what she did, not planning the happiest day of her life.

But as DOOL viewers know, Lani is indeed suffering. She feels terribly guilty for what happened, and even though she knows intellectually that her shooting was “clean,” and that she did what she was trained to do as a cop, she still feels awful at the outcome. She knows that she couldn’t have predicted that Stefan would jump in front of Vivian in the way that he did, but that doesn’t change the fact that a man is dead because of something she did. She’s going to feel the guilt for a long time.

Well, it seems that Gabi will want some big-time revenge on Lani, and it looks like she may use Lani’s guilt to get her to do something terrible. Gabi will think that it’s not fair that Eli and Lani get their happy ending, so she’ll drop a bomb on Lani – she’ll tell Lani that she wants her to dump Eli at the altar. It will sound like a weird request to Lani, but Gabi will be dead serious. Gabi will feel that Lani has taken so much from her – first Eli, and now Stefan.

But will Lani be feeling so much guilt that she’ll actually go along with Gabi’s demand to dump her fiancé’ at the altar? We have to remember that Lani is in a fragile emotional state right now, too, since she is responsible for taking someone’s life. That has taken a huge toll on her, and she might end up thinking that Gabi has a point and that she shouldn’t be happy. But would she actually dump Eli at the altar for Gabi?

What do you think? Will we see Eli and Lani actually get married? Stay tuned to DOOL and don’t forget to check CDL often for the latest Days of Our Lives spoilers, updates, and news.

General Hospital Spoilers: Laura And Curtis Brainstorm! How Will They Deal With Those Who Get In Their Way?

Days Of Our Lives Spoilers: Nicole Runs To Will And Sonny, Continues Blabbing Sami’s…