General Hospital Spoilers: Laura And Curtis Brainstorm! How Will They Deal With Those Who Get In Their Way? 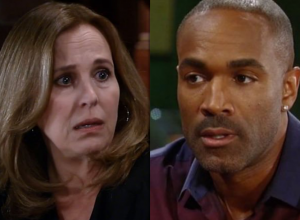 General Hospital spoilers tease that now that Valentin Cassadine (James Patrick Stuart) is not moving out of Wyndemere with his daughter, and Laura Collins’ (Genie Francis) granddaughter Charlotte Cassadine (Scarlett Fernandez) there may be more opportunity to see if Mikkos Cassadine’s (John Colicos) codicil is on Spoon Island, and if Helena Cassadine’s (Constance Towers) portrait has merely been moved somewhere else in the Wyndemere mansion, and not thrown out like Valentin told Laura!

Laura knows that Valentin may have been lying about throwing out the portrait, although he did seem sincere when he told Laura he had when she wanted to buy it from him. She did take a photo of it on her cell phone so she does have something of the portrait, however small. As viewers will recall from a scene a couple of years ago when Drew Cain (Billy Miller), then believing, as the rest of Port Charles did, he was Jason Morgan (Steve Burton) before the real Jason showed up, Curtis will not be too keen at the idea of dumpster diving to look for the portrait! That was a pretty humorous scene when Drew/Jason and Curtis were looking for some evidence in a dumpster and Curtis nearly screamed like a little girl when he saw a rat! Drew/Jason teased him about it! However, Curtis, as a private investigator may have something he can do to enlarge the photo clearly that Laura has on her cell phone; maybe not quite as expertly as say, Damian Spinelli (Bradford Anderson) but possibly at least as large as maybe to 8”x10” without pixilation.

GH Spoilers – What If The Codicil Is In The Mansion?

Viewers will recall that the constellation pattern in the jewels in Helena’s jacket on the painting that Kevin Collins (Jon Lindstrom) figured out when he and Laura were there babysitting Charlotte pointed to a certain time that the stars would be in the right grouping to point to the location of the codicil. Laura found a book in the Wyndemere library that helped narrow this down – to Spoon Island. However, it will need to be narrowed down much more than “somewhere on Spoon Island” and it could still be in the mansion itself. There are many secret rooms and passageways in the mansion, plus some tunnels underneath that may still be intact, if the earthquake a couple of years ago didn’t cause damage to them. Viewers will also recall that the catacombs under Port Charles itself sustained some damage from the earthquakes and were closed to the public from an episode last summer when Josslyn Jacks (Eden McCoy) and Oscar Nero Quartermaine (Garren Lake Stitt) got in some trouble trying to explore them and had to be rescued. But Spoon Island is located some miles away from Port Charles proper, so the tunnels there may not have been affected.

Valentin, Nina Reeves (Cynthia Watros) and Liesl Obrecht (Kathleen Gati) may need to be distracted if further searching needs to be done in the mansion; and Nina’s having Sasha Gilmore (Sofia Mattsson) arrested may be the perfect opportunity; if all are in court for Sasha’s hearing, as they may be, if Alexis Davis (Nancy Lee Grahn) calls Liesl in as a witness and Michael Corinthos (Chad Duell) has Valentin brought in for questioning as he threatened in October 16th’s episode, that may provide the window of time necessary for Wyndemere to be searched thoroughly for the codicil, and possibly the grounds as well!