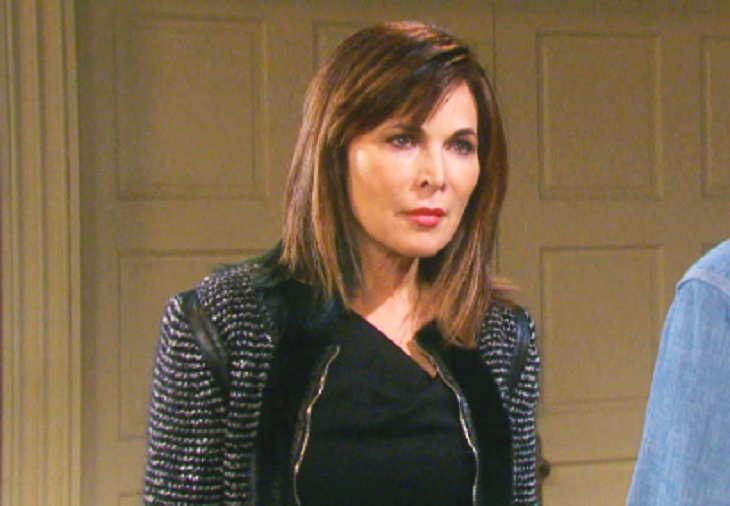 Days of Our Lives spoilers for Friday, August 16 finds Stefan DiMera (Brandon Barash) telling Gabi Hernandez (Camila Banus) that he loves her even though she has doubts about their marriage.

Days of Our Lives spoilers tease that Gabi will get a hold of Kristen’s wig and low and behold, her mask comes off. Gabi is stunned to see that it’s not Nicole who she was fighting, but Kristen DiMera instead. Clearly, Kristen’s days in Salem are numbered.

It leaves her no choice but to do what she needs to in order to get rid of Gabi and her husband, Stefan DiMera (Brandon Barash) who walks in on all of the action. Stefan manages to not only outsmart Kristen, but save Gabi in the process, too. Later on, Gabi thanks her husband for saving her life but is confused as to why he did it. Stefan simply tells her it’s because he loves her.

Elsewhere, Ben and Ciara are on a mission to find out who killed Ted Laurent (Gilles Marini). It was actually Stefan who put Ben on the case. Stefan was at first arrested for the crime, but Hope Brady (Kristian Alfonso) doesn’t think that he did it while Rafe Hernandez (Galen Gering) adds that it might have been a woman who did it.

While sniffing out some clues, they realize that their trail is leading them to Nicole Walker’s suite at the Salem Inn. However, little do they know that Nicole is actually Kristen in disguise. Ben and Ciara end up hiding underneath Kristen’s bed, which of course, is the last place they want to be.

Kate spent a lot of time in a basement with Ted Laurent (Gilles Marini) before they were both freed. Ben will learn that Kate knows about Kristen’s two-faced life and will reach out to her hoping that she might be able to provide some answers to his burning questions.

Plus, if there is one person who might provide a little insight to what is making Kristen tick right now, it’s definitely Kate. With that said, both Ben and Ciara will find a reason to be suspicious of her and her motives.

The Young and the Restless Spoilers Friday, August 16: Lola’s Dad Shows Up At The Wedding – Kola Get Married Not Knowing He’s There