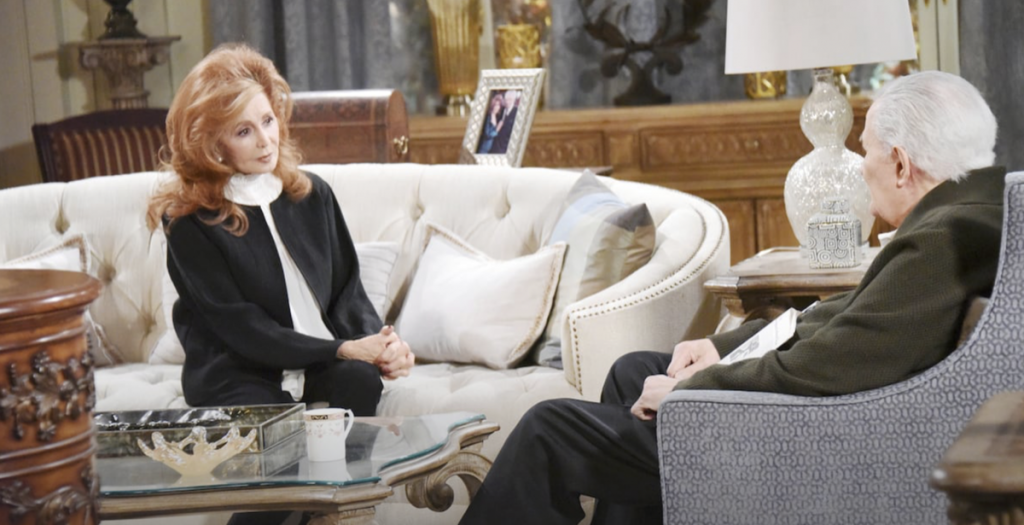 The Days of Our Lives weekly promo video, “Blood, Sweat, And Tears” features three main situations that take place on this week’s show. “Blood” represents the return of Jordan Ridgeway (Chrishell Hartley) to Salem, when she is released from Bayview. Ben Weston (Robert Scott Wilson) tells his girlfriend Ciara Brady (Victoria Konefal) that his sister’s released; then we see a confrontation between Ciara and Jordan, Ciara telling Jordan “You tried to kill me!” to which Jordan replies “And I deeply regret that!” “Sweat” represents Nicole Walker (Adrienne Zucker) and Eric Brady (Greg Vaughan) finally consummating their relationship as they make love, and then there’s a scene of Ben and Ciara after making love.

“Tears” represents Jennifer Horton’s (Melissa Reeves) kidnapping, as she is gagged and tied up; we see she wiggles out of her restraints long enough to get her cell phone and text Jack Deveraux (Matthew Ashford) but then the kidnapper grabs the phone as Jack is heard on speaker saying “What have you done with Jennifer?!”

Monday, Jack accuses Eve Donovan Deveraux (Kassie DePaiva) of trashing the hospital lab that Jennifer had set up for Dr. Wilhelm Rolf (William Utay) to use to make more amnesia serum and antidote, after Jennifer, Jack and Rolf came back to the lab in Friday’s episode to find it trashed! Eve had had gone to court for regarding her unlawful termination as Salem Police Commissioner. Of course, that would logically make her the prime suspect! Meanwhile, elsewhere in Salem University Hospital, Vivian Alamain (Robin Stasser) has snuck in disguised as a Dr. D. Cramer, determined to finish what she started when she shot Kate Roberts DiMera (Lauren Koslow) and buried her! Also on Monday, Nicole and Eric make love and Sarah Horton (Linsey Godfrey) is touched by Xander Kiriakis’ (Paul Telfer) devotion to her.

Tuesday, Maggie Kiriakis (Suzanne Rogers) confronts her husband Victor Kiriakis (John Aniston) about having tried to strangle Ben Weston! Days of Our Lives viewers will recall that he tried to get Xander to do it and then Xander refused, although he did knock him out and bring him to the Kiriakis mansion and tie him to a chair. Xander then ratted Victor out to Maggie up in Sarah’s bedroom when Maggie wanted to know why he was in there!

Elsewhere, Rafe Hernandez (Galen Gering) is notified that Jordan Ridgeway (Chrishell Hartley) is being released from Bayview and eagerly awaits news about Baby David Ridgeway (Jaxton and Dexter Ellis) as to whether Rafe will be able to still be in the baby’s life, considering he has gotten so bonded with the little one. Also on Tuesday, Jordan does indeed return to Salem, and Gabi Hernandez DiMera (Camila Banus) gets into an argument with Julie Williams (Susan Seaforth Hayes)!

Wednesday, Anna DiMera (Leann Hunley) pleads with Kristen DiMera (Stacy Haiduk) to help Tony DiMera (Thaao Penghlis) with winning his freedom; he is in jail awaiting trial for murdering Ted Laurent (Gilles Marini) when Kristen knows darn well it was an accident that happened when Tony and Ted struggled over a gun that Tony valiantly tried to get away from Ted when he was going to shoot Kristen!

Elsewhere, Brady Black (Eric Martsolf) is also talking about Kristen, making a confession to his dad, John Black (Drake Hogestyn) that he almost gave in to Kristen’s seduction of him and that she got him to take a sip or two of champagne to boot! Brady is an alcoholic and Kristen knows it! Also on Wednesday, Jennifer is held against her will, and Ben and Ciara are shocked when they discover Jordan has been released!

Thursday, JJ Deveraux (Casey Moss) and his father Jack become increasingly concerned about Jennifer, when they don’t hear from her and they are unable to reach her! Sarah makes an important decision about her baby; will she consider abortion? Also on Thursday, Jennifer’s captor is revealed, and Kristen tries to win Brady over with her good deeds!

Friday, Lucas Horton (Bryan Datillo) returns to Salem and gets upsetting news about his mother Kate’s condition, who slips into a coma after Vivian tries to finish killing her. Meanwhile, Lucas’ son, Will Horton (Chandler Massey) goes into investigative reporter mode and eavesdrops on Stefan DiMera (Brandon Barash) and Vivian talking together! Will he think to record their conversation on his phone? Also on Friday, Kristen presses Xander for information about Sarah’s pregnancy, and Jennifer tries to contact Jack.

Days of Our Lives Spoilers: Will Dr. Rolf Save Stefan Setting Up A Brandon Barash Return Option?