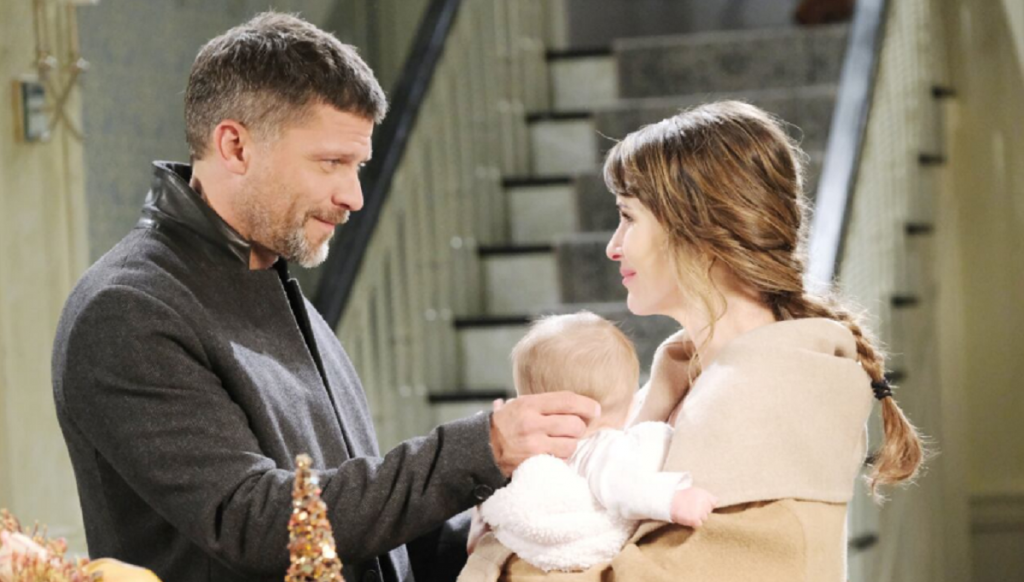 Days of Our Lives (DOOL) spoilers tease that Eric Brady (Greg Vaughn) and Sarah Horton (Linsey Godfrey) were just getting used to the idea of co-parenting since Eric just found out that he, and not Xander Cook (Pail Tefler), is baby Mickey Horton’s biological father. Sarah and Xander created the lie to preserve Eric’s relationship with Nicole Walker (Arianne Zucker). But once Eric discovered that Nicole was in on the secret and had been for over, he dumped Nicole.

On his first outing as a dad with little Mickey, he took his daughter to meet his father Roman Brady (Josh Taylor) and his mother Marlena Evans (Deidre Hall). Sadly, Marlena quickly noticed that Mickey was ill. And the news won’t be any better in the coming weeks and a cancer diagnosis is imminent. Mickey’s health will eventually improve and another crisis will come to an end. But spoilers tease that after all of this, Mickey may not actually be Eric and Sarah’s child.

Spoilers tease that a baby switch may have occurred and that Sarah and Eric’s baby is actually the one that died and the child they are raising actually belongs to Brady Black (Eric Martsolf) and Kristen DiMera (Stacey Haiduk). How this came to happen is still a mystery, but it’s possible Xander Cook (Paul Tefler) may have played a role in it.

Whatever the case or circumstances, if a baby switch happened, Eric and Sarah will be devastated. Having gone through so much with Mickey only to lose her in this way, will Eric be tempted to drink?

Although they aren’t together right now because of Nicole’s deception, she may be the only person able to get through to Eric before he self-destructs. Nicole and Eric belong together and maybe through all this tragedy, their love will be stronger than ever. Eric has been through so much but he doesn’t have to do it alone. It’s possible he will slip up and take a drink but with Nicole’s love and the support of his friends and family.

Will Eric and Sarah see baby Mickey through her medical crisis, only to find she isn’t theirs? Will Nicole be Eric’s hope for the future and keep him from some of his more self-destructive behaviors? Some heartbreaking scenes are coming up so stay tuned to Days of Our Lives airing weekdays on NBC. And don’t forget to check back here regularly for all your Days of Our Lives news, information, and spoilers!

The Young and the Restless Spoilers: Billy Bonds With Amanda – Should Victoria Be Concerned?